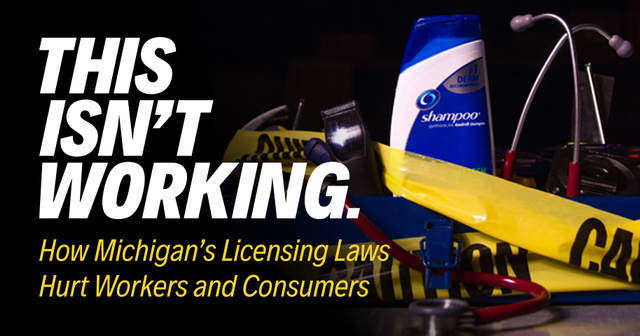 Assessing the impact of arbitrary licensing laws on the Michigan economy

MIDLAND — Occupational licensing increases costs for consumers and worsens income inequality without improving public safety, according to a new study published this week by the Mackinac Center for Public Policy.

This Isn’t Working: How Michigan’s Licensing Laws Hurt Workers and Consumers by Mackinac Center Policy Analyst Jarrett Skorup, takes a look at what Michigan mandates in order for many people to be able to work, how this affects their lives, and what needs to change. Over 20 percent of Michigan residents need a license from the state to perform their jobs. This requirement covers high-wage occupations like lawyers and doctors, middle-class professions like cosmetologists and barbers and less common jobs like martial arts timekeepers and hearing aid dealers.

Licenses are widely believed to be a way of protecting the public, but there is no evidence for this. The study shows how licenses are created at the insistence of people and interest groups already practicing an occupation as a way of limiting competition in their respective fields. Once the license exists, it is seldom repealed, which is why the percent of licensed workers has increased about fivefold over the last several decades.

All told, Michigan’s licensing apparatus costs approximately 125,000 jobs and $2,700 per household each year. This is an enormous cost, with no measurable benefit for public health and safety.

While many licenses required in Michigan are mandated in other states as well, many cover professions that are rarely, if ever, licensed elsewhere. And many of Michigan’s common licenses are more restrictive than corresponding licenses in other states and set an arbitrarily high barrier to entry to lower-income professions.

“Michigan is one of only 10 states to license painters,” Skorup notes. “They must take 60 hours of classes, pass an exam and pay a $200 fee. Meanwhile, it only costs about $30 to become an auto mechanic, which covers a test and a license fee. Is one of these occupations significantly more dangerous to public health and safety than the other?”

Licensing laws also have a negative impact on prisoner rehabilitation and drive up recidivism rates. Many licensing laws prevent anyone with a criminal record from obtaining a license, while others have a “good character” provision restricting access to work. The study recommends making it easier for ex-offenders to earn licenses, especially if their criminal behavior was in no way associated with the type of license they are seeking.

“There is research that shows the higher a state’s licensing mandates, the harder it is for ex-offenders to find work and the more likely they are to go back to criminal activity,” Skorup said. “There is good reason to keep some people out of some occupations, but missing a child support payment should not prevent someone from becoming a janitor.”

The problem with occupational licenses is compounded in the city of Detroit, which licenses about 60 occupations. The state of Michigan chooses to not license roughly half those occupations, including washers and snowplowers. For the other half, the city adds fees and requirements beyond what the state requires. Skorup suggests that the city consider licensing reform as a way of improving its struggling economy.

Michigan has made strides toward occupational licensing reforms in recent years, repealing some licenses and lessening requirements and restrictions on others. But there is more work to do. The study has suggested legislation to ensure the public is protected while allowing more jobs and competition in the market.

“If a license doesn’t contribute to public safety, is more restrictive than it needs to be, or is subsidized by the state, it should be repealed or rolled back,” Skorup says. “Licenses that do not meet this criteria are a drag on the state economy and resources. There are many better, alternative ways to reduce fraud and protect the public.”

To read the study and learn more, go to www.mackinac.org/licensing.