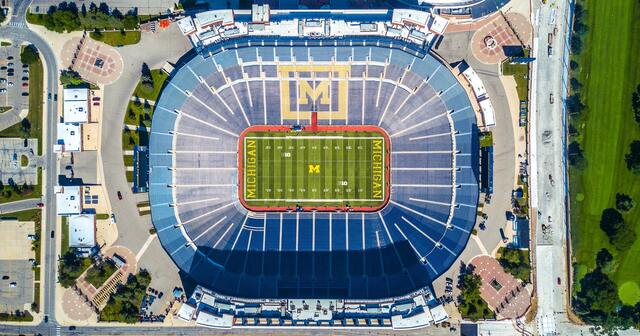 The University of Michigan Wolverines take on the Michigan State Spartans this weekend, and a large number of Michigan residents will take sides over which school they like most. State lawmakers take sides, too, and their preferences matter a lot to the schools' bottom lines. The universities are taxpayer-funded institutions, and lawmakers get to reward the schools they like most with more taxpayer dollars. Most residents may not know this, but our lawmakers favor the University of Michigan. By a lot.

The University of Michigan at Ann Arbor gets $13,071 for every full-time equivalent student who is a Michigan resident. Michigan State University gets $7,547 per resident student.

One of the few things that the state asks universities in return for its $1.7 billion in taxpayer funding is that they charge resident students less than nonresidents, so it makes sense to compare funding on a per-resident student basis.

How much each school gets, however, is the result of pure favoritism. The state does not distribute money to schools based on merit or performance, or even how many resident students they serve. Universities receive money based on what they got last year, and what they got last year is based on politics. The University of Michigan gets more money because politicians like it more.

Residents ought to ask what public good comes from such arbitrary funding amounts. The differing allotments from the state treasury don’t provide equal treatment to resident students. They don’t encourage fair competition among universities. They don’t even reward schools that are effective at turning tuition dollars into degrees. Lawmakers certainly didn’t use the funding to punish either the University of Michigan or Michigan State University after it was found that their employees sexually abused people for decades (and with others covering it up), so they don’t use funding to hold schools accountable, either.

It doesn’t have to be this way. There are 13 states that use some sort of enrollment-based formula to determine how to divide up taxpayer support to universities. Michigan ought to move in that direction and fund schools by how many resident students they teach and, perhaps, how many students graduate. If lawmakers care about students completing a degree program, then taxpayers ought to fund that outcome.

The state ought to change the way it funds state universities. Lawmakers should stop directing the flow of dollars on the basis of political preferences and instead establish some rules about what best serves the public.