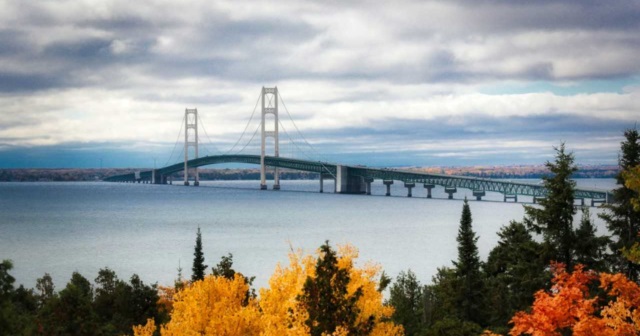 The Line 5 pipeline runs directly through the Straits of Mackinac, transporting up to 540,000 barrels of oil per day.
Publications / Viewpoints

On June 9, a unanimous ruling from a three-judge, appeals-court panel dealt another blow to Michigan Attorney General Dana Nessel’s prolonged campaign to permanently close the Line 5 pipeline. But on June 25, Ingham County Circuit Court Judge James Jamo ordered the line to be temporarily closed, leaving people wondering about the cost and supply of energy they need to heat their homes and run their businesses.

For the good of the entire state, it’s time to recognize that the disputed law, which allows Canadian energy company Enbridge to relocate the pipeline to a cement-lined tunnel 100 feet below the bed of the Great Lakes, is constitutional. Nessel has argued that it’s too dangerous to leave the pipeline where it is. So relocating it to the tunnel is clearly the best option. Doing this maintains an essential piece of the state’s energy infrastructure and protects the Great Lakes by taking the pipeline out of the water. That’s a win for pretty much everyone.

Furthermore, a diverse coalition of voices has asked both Gov. Gretchen Whitmer — another critic of the tunnel — and Nessel to reconsider their actions. Business groups, state and local officials and voters note that the campaign against the pipeline could have profound negative impacts on the entire Great Lakes region’s energy supply and economy. Last year, Ohio Gov. Mike DeWine wrote a personal letter to Whitmer, stating that closing Line 5 would harm refineries in his state, kill off “more than 1,000 good-paying union jobs” in both states and limit the supply of jet fuel that goes to the Detroit airport.

Also last year, Operating Engineers Local 324 co-published a letter with the Michigan Chamber of Commerce, asking Whitmer to let the Line 5 tunnel project move forward. Bay City Democrat and State House Rep. Brian Elder even went so far as to form a labor caucus in the Michigan House to defend Michigan’s building trades workers who would be employed to work on the tunnel. Elder worried that a lack of Democratic support for the Line 5 bill — which approved the tunnel project — suggests that a “Sierra Club scorecard means more to some Democratic members than the position of the building trades.”

Around the same time, the consul general of Canada in Detroit, Joe Comartin, warned that the loss of Line 5 would put refineries in Sarnia, Ontario, under severe stress. The governor’s Upper Peninsula Energy Task Force Committee indirectly conceded that point in its recent recommendations on Michigan’s propane supply. The task force euphemistically said that the campaign to shut down Line 5 has the potential
to “disrupt” Michigan’s supply of propane. Reports the task force have reviewed clearly recognize the potential impacts on the supply and pricing of heating fuels for approximately 23,000 households across the Upper Peninsula and 300,000 homes in the Lower Peninsula.

One Michigan Public Service Commission report recognized that closing Line 5 would require propane to be trucked from Superior, Wisconsin. But the report appears to assume there would be enough fuel in Superior to supply the changes in demand without increasing prices for Michigan residents. Even with that optimistic assumption, it still recognized that propane prices in the U.P. could increase by 10 cents per gallon. That report also suggested that moving propane by rail, or trucking from other areas, like Kincheloe, Michigan or Sarnia, would raise propane prices by as much as 35 cents per gallon. Additionally, trucking and rail supplies can be easily disrupted by the heavy snows and extreme cold that Upper Peninsula residents regularly endure. That could leave Michiganders in the cold and dark if propane shipments were delayed.

By continuing the efforts to close the pipeline, the governor, attorney general and others are wasting the state’s time and money, and they ensure the pipeline remains in the water longer than it needs to be. If they are convinced the pipeline represents too great a risk to be left there, then why continue to stall efforts to move it? Whitmer and Nessel have now had two years and two chances in court to achieve their preferred policy, but have failed. It’s time to stop blocking Enbridge’s attempts to begin construction on the tunnel and let it get to work.