Government Funding of Sports Arenas is an Expensive Psychological Boost 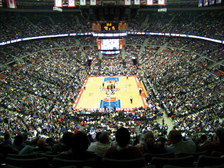 Money that could be spent on Detroit schools or public safety may end up instead going to help the Pistons move away from a perfectly good home at The Palace at Auburn Hills. Photo by Kevin Ward.

At a Nov. 21 press conference, the Detroit Pistons announced that they are moving to the new Little Caesars Arena in downtown Detroit. As part of the deal, however, the Pistons are asking the Detroit City Council to approve $34.5 million in public financing to pay for arena upgrades to accommodate the move and a property tax exemption for a new practice facility. The City Council will hold hearings in March on these subsidies, but it should reject the use of public tax dollars to finance the team’s move.

Revenue meant to fund Michigan’s public schools is already partially subsidizing the arena, and the additional money the Pistons seek will only increase this misdirection of taxpayer dollars.

It is well established in economic research that publicly financed sports arenas yield only minimal economic benefits for cities and taxpayers. A major problem is that these arenas are closed most of the time. NBA and NHL teams have only 41 home games a season, meaning the new Little Caesars Arena will be closed far more often than it is open. A closed arena doesn’t generate much economic activity. Most people don’t consider this reality, because they visit arenas only on game days — when they are bustling with people.

On a related note, sports arenas don’t typically create a meaningful number of new jobs, either directly or indirectly. The jobs directly created by sports arenas tend to be low-wage, part-time food service jobs. And while nearby restaurants and shops enjoy a burst of activity on game day, it’s typically not enough for them to profit by creating new, permanent jobs in response to this sporadic and limited increase in demand.

The fact is that the lion’s share of the revenue generated by sports arenas goes to the players and team owners. This is one reason why modern sports arenas build their own restaurants, shops and entertainment centers — it’s an attempt by the team to capture an even larger share of the revenue generated by each event. The Pistons would develop these auxiliary businesses regardless of whether they played in downtown Detroit or remained in Auburn Hills.

Another problem with subsidizing the Pistons’ move is that it will increase the monopoly power for concerts and special events enjoyed by the firms that profit from such events, such as the recently combined Palace Sports and Entertainment and Olympia Entertainment businesses. The Joe Louis Arena, which currently hosts events, is already slated for demolition — at taxpayer expense — once the new arena is completed. And if the Pistons move downtown, the Palace will likely be demolished too. As a consequence, the Little Caesars Arena will face little in the way of competition for concerts and special events, which means higher ticket prices for fans and larger profits for the newly combined concert business.

The $34.5 million subsidy will add to the $262 million of the Little Caesars Arena’s construction costs, which are already subsidized through property taxes collected by the Detroit Downtown Development Authority. If it were not used to subsidize this arena, this property tax revenue could be used by the city to provide public services to residents and to fund its public schools. The shortfall in school funding that results from redirecting this revenue to the development authority will be backfilled by the state’s School Aid Fund. In other words, revenue meant to fund Michigan’s public schools is already partially subsidizing the arena, and the additional money the Pistons seek will only increase this misdirection of taxpayer dollars.

Detroit has many unmet needs. These include a beleaguered school system that recently received a state bailout and an unreliable public transportation system. The city suffers from one of the highest violent crime rates in the nation. The Detroit Pistons already have a perfectly good home at The Palace of Auburn Hills. Moving the Pistons and demolishing The Palace represents a waste of useful and much-needed resources.

The Detroit Free Press recently called the Pistons’ planned move “yet another psychological boost for the city.” That may be true, but economic research suggests that’s probably the only benefit residents will feel. And if the City Council approves more public subsidies to sweeten the deal, taxpayers will pay a lot to feel a little bit better.