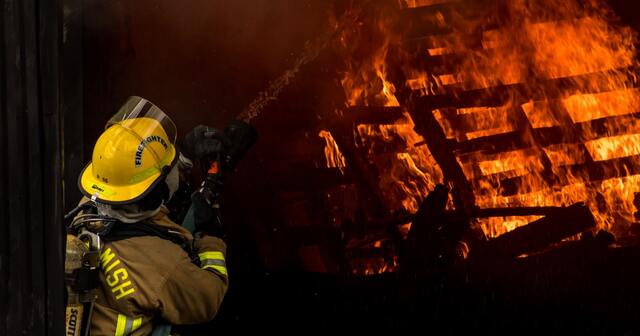 Fire Departments Spend Millions When They Don’t Have To

Data shows volunteer firefighters are just as effective as the professionals

Michigan fire departments are mostly staffed by professional, paid firefighters. About one in four is a full-timer and one in seven is a volunteer; the remainder are part-timers. Departments that employ mostly full-time staffers cost local taxpayers millions more than volunteer stations, but they don’t have much to show for it.

It is commonly argued that paying more for full-time professional firefighters is worthwhile to maintain a higher level of fire protection. But volunteers tend to do as good of a job, and at a fraction of the cost.

Insurance data suggests that volunteer firefighters are, on average, just as effective as the professionals. There is no systematic difference between the two based on the Insurance Service Office’s “public protection classification.” Insurers use this metric of fire protection quality to determine property insurance rates for a given jurisdiction.

Consider, for example, the cities of Troy and Lansing. Troy’s fire service, which covers the city’s 83,000 residents, has consistently been among Michigan’s most highly rated stations. Troy’s residents pay, on average, $66 dollars each for the operations of a fire house staffed by 180 volunteer firefighters and only 11 full-time staffers. Meanwhile, Lansing, Michigan’s third largest fire department, employs 190 full-time firefighters and costs $260 dollars per capita for the city’s 127,000 residents.

Troy and Lansing both have high scorers according to ISO: Troy’s department is within three points of Lansing’s score, based on a scale of 100 points that factors in fire infrastructure, equipment and communications. This means both stations provide virtually the same level of high-quality fire services at prices that are notably different. Troy residents pay $194 less per capita annually for essentially the same quality of service provided in Lansing.

Volunteers obviously provide wage savings, but volunteer fire departments help local governments save money in other ways too. For instance, they do not need to negotiate with unions and can avoid union contract provisions that boost the cost of the service, through policies like mandatory staffing rules. These rules require a minimum number of firefighters to be on the clock at any one time and end up requiring municipalities to significantly increase wage costs through overtime compensation.

Fire stations have the option of hiring more staff to fill vacant positions, yet many departments choose to pay their current staff overtime compensation to avoid the long-term costs of additional training and pension payments for new firefighters. Paying current firefighters higher wages does not necessarily translate to better fire protection for local communities.

The Detroit fire department racked up a massive $7 million dollars in overtime on top of $60 million in payroll costs this past year, which represents 60% of its total spending. The city may be able to hire more firefighters and still spend less if it worked on managing its overtime use.

Union contracts also often stipulate that retiree benefits are determined based on the employees’ last years of income, not just their base salary. This lets employees spike their pensions by adding supplemental income, such as overtime and cashing in unused sick days.

Pension spiking exacerbates pension underfunding. Most full-time departments offer retirees defined-benefit pension plans but do not set aside enough money to pay for what is owed. This just pushes the costs of today’s fire services onto future taxpayers. These pension costs must be paid off under state law, meaning that they must take precedence over the purchase of new equipment and additional training.

Fire departments that primarily rely on volunteers do not have any of these issues that raise the costs of services and force some of those costs on future taxpayers.

City managers, mayors and township supervisors ought to ensure that their residents’ tax money is well spent. The extra benefits of operating a full-time professional fire department simply aren’t there to justify their costs compared to a volunteer fire department. Local policymakers ought to re-evaluate contracts and consider converting their departments to a volunteer-led force. Michigan’s firefighters — both paid and volunteer — deserve our praise for their sacrifice and service, but if firefighting services needlessly consume scarce government resources, all of us may start to feel the heat.

Editor's Note: The original article previously compared Troy and Kalamazoo. It has since been edited to compare Troy and Lansing. The remaining data has been updated accordingly.