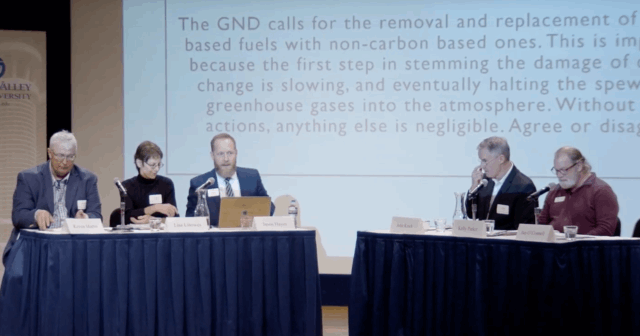 How would you respond to this question? How would your response change if you were asked that question before an audience of more than 300 people?

On Feb. 18, the Hauenstein Center for Presidential Studies at Grand Valley State University hosted a debate. The topic focused on policy solutions to climate change and whether the private or the public sector is better equipped to handle it. The discussion centered on one possible government solution: the Green New Deal.

The Mackinac Center was invited to take part as a “pro-private sector” advocate. As its director of environmental policy, I participated, along with Kevon Martis, of the Interstate Informed Citizens Coalition, and Lisa Linowes, founder of windaction.org. On the “pro-government action” team were John Kinch, with Michigan Energy Options, and Kelly Parker, director of GVSU’s Environmental and Sustainability Studies program. Jan O’Connell, with the Michigan Chapter of the Sierra Club, was scheduled but unable to attend.

After opening statements, our moderator — Michael DeWilde, director of the Koeze Business Ethics Initiative at GVSU — opened. He asked if replacing carbon-based fuels to halt the emissions of greenhouse gases was an important first step in “stemming the damage of climate change.”

I pointed out that the question left the phrase, “the damage of climate change” undefined. Without a clear understanding of whether climate change is an existential threat or merely a challenging but still solvable policy and energy issue, it is impossible to develop an effective climate policy.

And, despite what you may have heard, the science is not settled. The Intergovernmental Panel on Climate Change’s “business as usual” climate modeling scenario — referred to as Representative Concentration Pathway 8.5 — envisions a 500% worldwide growth in coal use, as well as far fewer efforts to implement efficiency measures and cut greenhouse gas emissions. The IPCC says this would lead to temperature increases of up to 5°C, but scientists now see the scenario as “increasingly implausible.” These researchers point to less extreme modeling scenarios that predict fewer ecological and economic disruptions from far less warming: only 2.5 to 3°C.

But the former chair of the School of Earth and Atmospheric Sciences at the Georgia Institute of Technology, Judith Curry, estimates the IPCC’s climate models “exaggerate the global warming from CO2 emissions by as much as 45%.” So, a back-of-the-envelope calculation could put potential warming at 1.12°C to 1.65°C, right in line with the 1.5°C target recommended by the IPCC in its 2018 special report.

As a follow-up, DeWilde asked if the Green New Deal, however noble its motives, would be ruinous for our economy. I argued that the predicted $93 trillion / $600,000 per household price tag would be economically ruinous for the country. The environmental impacts of implementing a GND would also, to use the language of green groups, “imperil” many wildlife species. Wind turbines already have heavy impacts on birds and bats; building hundreds of thousands more would intensify that damage. More solar would heighten those impacts as birds often injure or kill themselves when they mistake solar arrays for open water and try to land on them. The habitat for many other species would vanish as solar and wind facilities displace forest and farmland across the nation.

When challenged about the potential impacts of uranium mining and nuclear power, I explained that the mining activity required by the GND would dwarf current uranium mining. According to research by Mark Mills of the Manhattan Institute, a single wind turbine “requires 900 tons of steel, 2,500 tons of concrete and 45 tons of plastic.” GND proponents envision many hundreds of thousands to millions more being built.

Unfortunately, the panelists did not agree on a workable solution for the climate or the Green New Deal. But we did come away with something just as important: a starting place. In our closing statements, we agreed that discussing our differences in a collegial and respectful manner could begin to break down partisan barriers. We hoped that others choose to leave behind the protective embrace of the echo chambers that insulate them from opposing views.

Efforts like this Hauenstein Center debate can bring together different groups and challenge us to find answers to difficult policy questions. Answering the “now what?” part of our opening question is a rarely easy or comfortable task, but, given the partisan divide that is splitting the nation today, it is increasingly an important one.