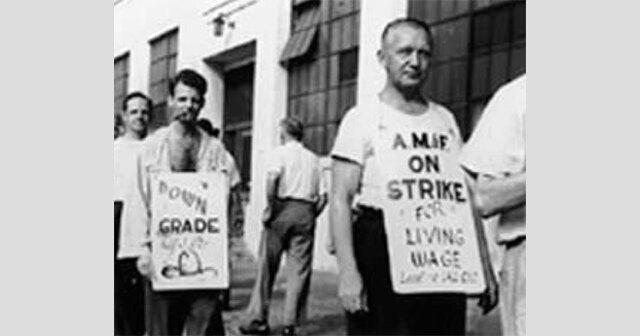 Empowering unions sparked a “depression within a depression” in 1937.
Archives of Labor and Urban Affairs
Labor
Blog

Michigan Democrats are contemplating a repeal of the state’s right-to-work law following midterm elections that handed them control of the state’s legislature for the first time in 38 years. Lawmakers thinking about such a move should reconsider. The law has been a tremendous boon to Michigan’s economy, and it is popular with voters.

Our organization, the Mackinac Center for Public Policy, recently commissioned a poll on Michigan’s right-to-work law, which freed workers from being forced to financially support a union. Lest it be said the poll was biased, here’s the exact wording.

Michigan passed a “right-to-work” law 10 years ago. The law says that nobody can be required to pay dues or fees to a union in order to hold a job, even if they work in a job covered by a union contract. Do you support or oppose this law?

This shouldn’t be a surprise. After all, Michigan voters expressed their opinion on right-to-work shortly before it was adopted ten years ago. In 2012, Michigan voters were presented with the question of whether to adopt a constitutional amendment called “Protect Our Jobs.” If passed, this amendment would have banned right-to-work, along with almost any other law that would interfere with collective bargaining.

Michigan voters rejected this proposal by 57 percent to 42 percent.

Keep in mind, 2012 was hardly a “red-wave” year, as Democrats picked up eight seats in the U.S. House and two in the Senate. President Obama won reelection by almost 5 million votes, the popular vote by almost four points, and the electoral college by 126 votes. Even in an election that was generally more favorable to Democrats, the Protect Our Jobs amendment was soundly rejected by Michigan voters. Michigan’s legislature recognized this and a little over a month later adopted the state’s right-to-work law.

Why is the law so popular? Probably because of the tremendous benefits it brings to workers, families, and Michigan’s economy as a whole.

In 2022 the Mackinac Center for Public Policy published its own study using a similar methodology and found the manufacturing share of employment in right-to-work states was 21 percent higher in border counties for states that adopted their laws after 2000. The share was even higher in Michigan and Indiana. The center’s study also found positive gains in the construction industry.

Such is the result of worker freedom. And we’ve seen a great many workers exercise this freedom since the law was enacted. Almost 20 percent of Michigan’s private-sector union members have left their unions since the law was adopted, keeping millions of dollars in dues in their own pockets. Each one of these workers has made clear that they do not want to financially support a union.

For some, that could be motivated by their union’s political activity: Michigan’s unions donated almost $2 million to Governor Whitmer’s political campaigns and millions more to the Michigan Democratic Party. Leadership scandals may have motivated other union members to disassociate. Still more might simply believe their union is not providing services that justify the costs of their dues. Regardless of their individual reasons, forcing these workers to support a union shows a clear disregard for their right to free association.

Lawmakers should resist the urge to ignore the will of the people in favor of special interests, especially to repeal a proven policy. Michigan’s economy is stronger, and its workers are better off, with right-to-work. If lawmakers are serious about making Michigan a place where anyone can thrive, preserving right-to-work is nonnegotiable. And if Democrats repeal it, they may discover the flip side of an old saying: Bad policy is bad politics.