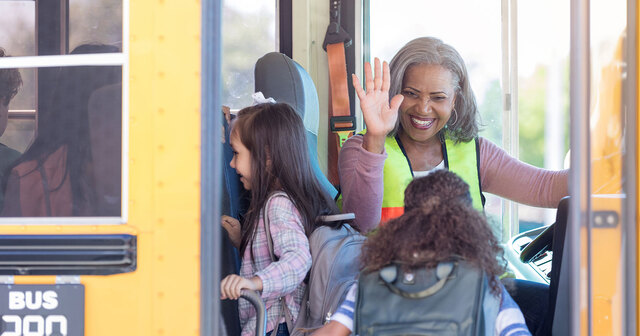 Contracting out with private companies to provide support services has been a time-tested way for school districts to save money and improve their operations. The Mackinac Center has surveyed districts going back to 2001 to find out just how many contract out for food, custodial and transportation services. We found that contracting increased from 31.0% of school districts in 2001 to 69.6% in 2021.

Contracting has remained around 70% of districts since 2005. The near-constant number conceals changes at the district level. Some started contracting out and others brought services back in-house. Districts that contracted out typically cited staff shortages. Districts that brought services back in-house tended to mention that they had problems with contractors’ quality.

Whether they use contractors or retain services in-house, districts mentioned that it is harder to find people to fill positions, and retaining employees is more difficult than it used to be.

Of Michigan’s 539 public school districts, 375 contract out for food, custodial or transportation services, or 69.6% of districts. This is a small decrease from the peak levels in 2017, when 71.1% of districts contracted out. Contracting out has stayed at around 7 out of every 10 districts for the past 6 years. 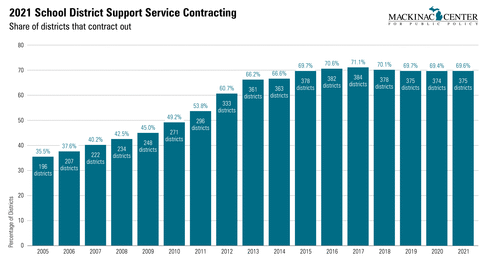 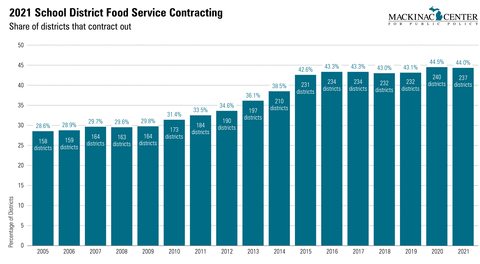 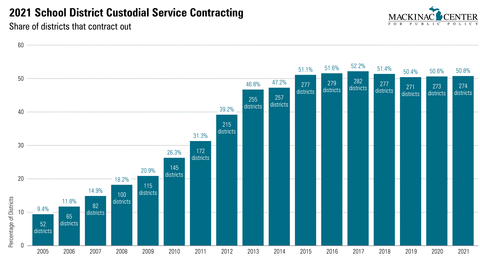 Contracting out transportation service grew from less than 5% of districts in 2005 to over 25% in 2015. Unlike food and custodial services, transportation contracting increased over the past two years. Four of the districts that started to contract out cited difficulty in finding employees as a reason. Officials at one of the districts that brought services back in-house said that they were dissatisfied with their contractor and those at the other expected to save money from the move. 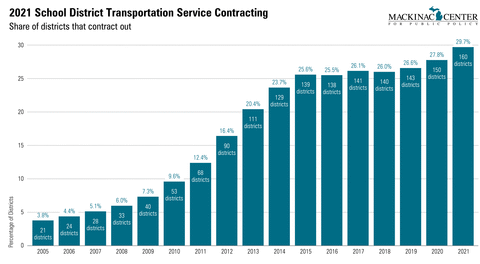 Clarifications by responders in this year’s survey resulted in an adjustment to the previous years’ results and raised the number of districts that contract out custodial services by one. They decreased the transportation count by two and decreased the total number of districts that contract out for any of the three services by three.