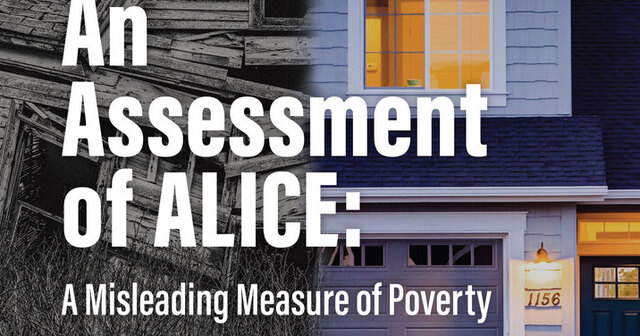 MIDLAND, Mich. — A series of reports published by the United Way attempt to identify households that are asset limited, income-constrained, and employed, or ALICE, and claims that 38% of households in Michigan cannot afford to survive. But a new study by the Mackinac Center for Public Policy finds that the ALICE methodology is flawed, failing at measuring the portion of households who cannot make ends meet. The study, “An Assessment of ALICE: A Misleading Measure of Poverty,” explains the major problems with ALICE reports.

The United Way reports attempt to measure the portion of the population that earns more than the federal poverty line but still struggles to make ends meet. The findings have received broad state and national media coverage and are often referenced by government officials and politicians. Unfortunately, a careful review reveals that the findings are misleading and inaccurate. Since this unsubstantiated number is sometimes used to support government policies, it could lead to overlooking households that may truly need assistance.

One of the significant flaws in the ALICE methodology is that it uses data on average spending to represent costs when creating a hypothetical “survival budget.” This budget is meant to represent the bare minimum costs households must pay to afford basic necessities, but it does not measure how much these items actually cost. Rather, it simply reports the average amount spent on things like housing, child care, food, transportation and other items.

“People spend less than the average on a variety of goods for lots of reasons, so using average spending levels to estimate minimum costs overestimates how many households face financial hardships,” said Jarrett Skorup, the Mackinac Center’s director of marketing and communications and co-author of the new study. “This method would say that even if a family’s income and spending on basic necessities stay the same, they become poorer when their neighbors spend more on those items.”

Another major problem is the method used for estimating the number of households earning less than the hypothetical survival budget. Even though the report recognizes that different types of households have varying financial needs, when determining which households to label ALICE, it simply counts all the households that earn less than a set threshold. This varies by county, and in Michigan, ranges from $35,000 to $60,000. This assumes that all households, no matter their size or situation, have identical financial needs. With this method, a single adult with an annual income of $59,000 could be considered financially worse off than a family of six with an income of $36,000.

Even the report’s name is misleading. Despite the ALICE acronym, the report does not measure the assets, income constraints or employment status of the population it claims to define and describe. It appears to simply assume that households with certain levels of income have these characteristics.

Due to these methodological issues, the findings of the ALICE report stand in stark contrast to a host of other analyses and economic data. These statistics generally suggest a gradual but steady increase in disposable income and living standards over time. In Michigan, for example, the ALICE report finds more struggling households in 2019 than in 2010, despite declining poverty rates and rising average income over this period, and a decrease in the number of low-income households.

“While the United Way’s intent is laudable, these reports do not provide an accurate picture of the financial problems households face,” said James Hohman, the Mackinac Center’s director of fiscal policy and co-author of the new study. “In fact, these reports distract from efforts to help families who are genuinely in need.”

You can view the Mackinac Center study here.