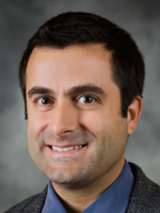 Nick Dranias is president and executive director within the Office of the President of Compact for America Educational Foundation, Inc. He also serves as a constitutional scholar, authoring scholarly articles dealing with a wide spectrum of issues in constitutional and regulatory policy.

Dranias previously served as general counsel and constitutional policy director for the Goldwater Institute, where he held the Clarence J. and Katherine P. Duncan Chair and directed the Joseph and Dorothy Donnelly Moller Center. Dranias led the Goldwater Institute’s successful challenge to Arizona’s system of government campaign financing to the Supreme Court.

Prior thereto, Dranias was an attorney with the Institute for Justice for three years and an attorney in private practice in Chicago for eight years. He served on the Loyola University Chicago Law Review, competed on Loyola’s National Labor Law Moot Court Team, and received various academic awards.

Had Enough of the Political Class Cash Machine? Compact for a Balanced Budget

Ten Facts to Rebut the Mythology of a Runaway Convention

The Myth of the Runaway Convention