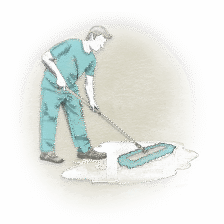 The publication of the state’s adequacy study a few months ago had school districts renewing their call for more money from the state taxpayers. But funding is only one side of the coin, and one that is often outside a district’s direct control. Cost is the other side of the school finance coin, and one way that districts can save on costs is to solicit bids to contract out support services. A new survey finds that more districts than ever are doing this.

More and more schools are using their funds wisely, taking advantage of the opportunities they have.

Fourteen districts started contracting for food and custodial services this year. But a similar number brought services back in-house.

Some districts that brought services back weren’t necessarily upset with their vendor. Richmond Community Schools, for example, used leased employees to provide food services and then put them on its direct payroll.

But as long as district officials search for ways to stretch their dollars, they will solicit bids from private vendors to see whether they can beat the district for cost and quality.

There is one factor that plays to the advantage of private companies that offer their services to districts: Their employees are not in the state-mandated retirement system. That system costs districts between 31 and 36 percent of their payroll. In contrast, retirement costs in the private sector are 5 to 7 percent.

Some people may worry that districts that contract out are simply choosing the cheapest option, whether or not the contractor provides shoddy service. But in the most recent survey, 89.3 percent of districts that contracted out reported they were satisfied with their contractors’ services. This high satisfaction rate makes sense because the districts that are unhappy with their vendors can shop around for others. The fact that districts can choose from a number of alternatives gives vendors an incentive to deliver excellent service at a good price. It also means that if district officials are unsatisfied with a vendor, they don’t have to stay unsatisfied; they can seek out someone else.

The growing use of contracting is good news for Michigan students and taxpayers alike. It means that more and more schools are using their funds wisely, taking advantage of the opportunities they have. They realize that the private sector is a legitimate option for providing support services. Once they begin contracting, they successfully consider which companies are best for them, as the satisfaction rate shows.