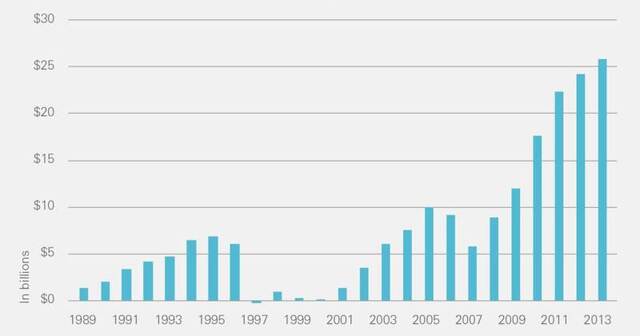 If you’re looking to save money, making extra payments on your mortgage can be a painless way to do it. Just an extra $1,000 each year, for example, could save tens of thousands of dollars over the life of the loan.

Now, imagine “paying the mortgage” for the Michigan Public School Employees Retirement System. The pension liability (just the debt) of this program is so big and will require so many years to pay it off, it is easier to think of it in terms of a mortgage.

In a report this summer, the Michigan Senate Fiscal Agency notes that an “extra” payment of $108 million was included in the budget for fiscal year 2014-15. While $108 million is a sizable sum, it barely makes a dent. The accrued liability for MPSERS, the amount taxpayers have to pay just to catch up, is $25.8 billion. Naturally, the pension system represents a huge issue when $108 million fixes only about 0.4 percent of the problem.

Paying down this unfunded liability crowds out spending on essential government services and investments, including education. Imagine if the state had an extra $108 million to hire new teachers. If you divide that payment by $100,000, roughly the amount for a teacher’s salary and benefits, it could mean 1,000 new teachers.

When you fail to make mortgage payments, you risk losing your house. Maybe if politicians viewed taxpayers more like banks, they’d be less inclined to make promises they don’t keep. Instead of scrounging around for extra payments on a large funding gap, lawmakers would do better to close MPSERS to new hires and make a defined-contribution plan mandatory for all future school employees.

James Hohman, assistant director of fiscal policy at the Mackinac Center for Public Policy, points out that MPSERS is costing schools nearly 30 percent of payroll. Compare that to the private sector, where retirement benefits cost 5 to 7 percent of payroll. Hohman says tinkering with contributions does little to make the system predictable or affordable.

Current legislators should be applauded for doing something. But bigger changes are needed. In a defined-contribution plan, government would be forced to place those retirement payments immediately into an account that was owned by the employee. Employees and taxpayers would no longer have to cross their fingers that retirement funds will be there in the future.

Anne Schieber is senior investigative analyst at the Mackinac Center for Public Policy, a research and educational institute headquartered in Midland, Mich. Permission to reprint in whole or in part is hereby granted, provided that the author and the Center are properly cited.