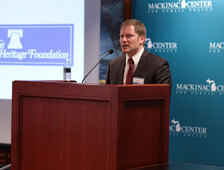 You can watch a replay of our Issues & Ideas forum about how to mitigate the damage caused by Michigan’s minimum wage hike at Mackinac.org/20065.

(A version of this commentary originally appeared in The Wall Street Journal on May 30, 2014.)

The same Republican Legislature and governor who stood down threats of violence 17 months ago to make Michigan the 24th right-to-work state have just handed unions and Democrats what they may not have been able to achieve on their own — a sizable hike in the state’s minimum wage.

There is plenty of low-priority spending in Michigan’s $52 billion budget that could be shifted to roads and bridges.

In the micro view, Republicans believed they did the best they could with the hand they were dealt. In the macro view, Democrats proved that the team that plays offense is the one that puts points on the board.

Michigan’s new minimum wage boosts the lowest legal hourly pay from the current $7.40 to $9.25 by 2018 and is indexed to inflation thereafter. The minimum wage for tipped employees jumps from $2.65 to $3.52.

A comprehensive review of scholarship in 2006-07 by economists David Neumark of the University of California at Irvine and William Wascher of the Federal Reserve found that 85 percent of “the most credible evidence” shows that wage mandates affect job seekers negatively.

Moreover, workers who don’t lose their jobs and get the pay hike aren’t necessarily the least well off. In 2013, the Employment Policies Institute conducted a state-by-state analysis of a hypothetical $9 minimum wage.
In Michigan, 42 percent of affected hourly workers would be those still living with parents or other relatives in households with average family incomes of $56,935.

Michigan’s recovery, real but modest after a decade-long slump, can hardly afford to make work more difficult to get for anybody, especially job seekers in the Detroit metro area where the unemployment rate is 8.1 percent.

Careful economic analysis did not lead the Michigan GOP to hike the minimum wage. Instead they implemented a two-pronged political strategy that observers will be arguing about for years. Republicans didn’t just pass the plan, they passed it with large enough majorities to implement it immediately, and for one very specific reason: to undermine a ballot initiative that would have increased the minimum wage to $10.10 an hour, indexed to inflation, including the same higher amount for tipped workers.

Raise Michigan, a coalition of labor and community groups linked to the Democratic Party, had gathered hundreds of thousands of petition signatures to place the measure on the November ballot. Republicans, fearing both the higher minimum wage and a higher Democratic voter turnout, passed a law that raised the minimum wage to $9.25 but also repealed and replaced the old minimum-wage statute — all part of a gambit to invalidate the ballot measure.

State Democrats are already gearing up for that fight. Raise Michigan’s ballot measure specifically refers to the now-repealed statute. The GOP legal thinking goes that a ballot measure that amends a dead statute is moot. That theory will certainly be tested in court, so it is unclear if the Republicans will avoid the $10.10 minimum wage after all.

The second part of the political calculus is Gov. Rick Snyder’s attempt to take care of long-overdue business: fixing Michigan’s crumbling roads. The Republican governor reportedly secured a promise from Democratic leaders that in exchange for the $9.25 minimum wage the minority party will supply votes for a $1.5 billion increase in the state’s fuel taxes to repair roads and bridges.

Only the most doctrinaire would insist that taxes never go up at all to fund roads. But there is plenty of low-priority spending in Michigan’s $52 billion budget that could be shifted to roads and bridges. For instance the state still lavishes $50 million in direct cash subsidies on movie makers and another $250 million in support of the state’s corporate welfare programs. Privatizing some prison facilities could save tens of millions, according to our research at the Mackinac Center. But the difficulty of cutting special-interest spending is so great that even a large tax increase seems preferable to the GOP.

These deals, if they work, will at least fix the state’s roads and avoid an even more harmful wage mandate. Tea Partiers are no doubt enraged but would be foolish to risk Republican control of the legislature in November with an attack from the right on GOP incumbents.

Perhaps the larger lesson is to be learned from the left. By going on offense with a bold minimum-wage hike, state Democrats forced their GOP counterparts to give them most of the wage they were seeking. They also get a tax hike for roads while lower priority spending likely remains untouched. What would it look like if the GOP, with total control of state government and sizable majorities in both houses, went back on offense for its goals?

Joseph G. Lehman is president and Michael D. LaFaive is fiscal policy director at the Mackinac Center for Public Policy, a research and educational institute headquartered in Midland, Mich. Permission to reprint in whole or in part is hereby granted, provided that the authors and the Center are properly cited.