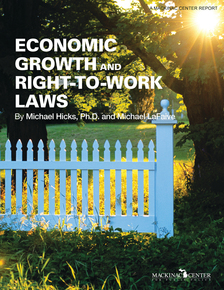 Economic Growth and Right-To-Work Laws can be found online at www.mackinac.org/19051

Michigan’s right-to-work law — which took effect earlier this year — may prove to be an economic boon for the state, particularly over time. The cumulative effect of right-to-work appears to have dramatically boosted the standard of living in the states which have adopted it.

Our new study assumes that growth rates in such things as personal income, population and employment are proxies for a state’s overall well-being. We measured changes in each over time, including a 64-year sweep from 1947 through 2011 and three other distinct and smaller time periods.

On its face, a 0.8 percentage point boost in personal income or employment growth may not seem impressive ­— unless it is taken in context. If a state would have otherwise enjoyed a 2 percentage point increase in growth, and adoption of a right-to-work law raised that rate to 2.8 percentage points, the improvement in the growth rate is a heady 40 percent.

These changes represent a permanent incremental average improvement. In other words, if population growth increases by 0.5 percent after adoption of a right-to-work law, than after 10 years a state would have seen a 5 percent increase in population growth above what would have been seen had the policy not been adopted. This is a subject which should be of great interest to Michigan residents, as the Great Lake State is the only state to have lost population in net terms from 2000 through 2009.

Because national and state economic performances can change over time, we divided our analysis into three smaller segments: 1947 through 1970; 1971 through 1990; and 1991 through 2011. During the first period of study, our research indicates that right-to-work laws had little meaningful impact on either average growth of personal income or in average growth of population.

The middle period (1971 through 1990) showed significantly different performance characteristics from right-to-work states in all three categories. Our model reports average annual growth rates for employment, personal income and population were 0.90, 0.93 and 1.30 percentage points higher, respectively. The final period (1991-2011) shows more modest gains, but ones that are still statistically and economically significant in each category.

Our empirical findings seem to align with more descriptive looks at the trends between RTW and non-RTW states.

Michigan’s right-to-work law started raucous debates in Lansing and elsewhere over whether or not such policies were beneficial. We believe the evidence reports to positive — sometimes very positive — economic consequences.

Michael Hicks is an adjunct scholar and Michel LaFaive is director of the Morey Fiscal Policy Initiative at the Mackinac Center for Public Policy, a research and educational institute headquartered in Midland, Mich. Permission to reprint in whole or in part is hereby granted, provided that the authors and the Center are properly cited.