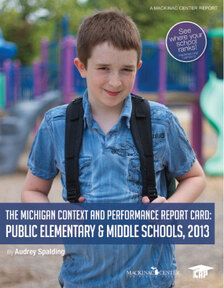 The cafeteria at Detroit Public Schools’ Thirkell Elementary may be the quietest in the state. On a school day in early June, parent volunteers and teachers milled among students, who spoke quietly to one another while eating lunch.

Parents, teachers and students all say that the warm atmosphere and focus on student learning at Thirkell is due to the leadership from Dr. Clara Smith, the school’s principal. “She is a great leader,” said Shailiaja Pritchett, a parent and school volunteer, “She demands excellence from everybody.” Indeed, Smith’s office walls are covered with awards, photos and thank-you cards from parents and community members. Smith’s leadership and focus on student learning has been critical to Thirkell’s success.

By capturing the socioeconomic background of students as well as test scores, the study is a better measurement for schools’ real-world effectiveness than state reports.

With the recent release of the Mackinac Center’s Elementary and Middle School Report Card, parent and teacher accolades are confirmed: Thirkell was the top-ranked school in the state of Michigan.

The Center’s report card provides parents, policymakers and the general public with a simple way to accurately compare the performance of schools throughout the state. By capturing the socioeconomic background of students as well as test scores, the study is a better measurement for schools’ real-world effectiveness than state reports.

The Center’s report card provides clear and intelligible rankings that do not penalize schools for educating needy students. We take student background into account by using the percentage of students at a school who qualify for a federally subsidized free lunch to predict test scores, and then grade the schools by whether their students did better or worse than expected. Four years’ worth of MEAP test scores in all subjects for grades three through eight were used to calculate a school’s score.

A school’s “Context and Performance score” indicates how far above or below projections an elementary or middle school performed, given its student population’s socioeconomic status, with 100 set as the average. The full report card and searchable database is available online at www.mackinac.org/CAP2013.

Accurately measuring school performance is becoming increasingly important in Michigan. School rankings are now used to identify schools for mandatory reform, which can include replacing the school principal. Legislators are also considering expanding the statewide Education Achievement Authority, and proposed legislation would use state rankings to determine which schools would be taken over by the EAA.

At Thirkell, almost 90 percent of students are from low-income families, yet students consistently score above the state average on MEAP tests. Adjusting for student background makes Thirkell’s success even clearer, with a CAP score of 137. Smith says that teachers and administrators focus on teaching students respect and discipline first, so that students are ready and willing to learn during class time.

The nine EAA elementary and middle schools included in this report card were among the lowest-scoring schools. All nine received F’s, and Burns Elementary-Middle School, formerly a DPS school, was the lowest-ranked school in the state. Since MEAP tests are administered in the fall, the low scores of EAA schools likely do not reflect the reform district’s performance, but rather the performance of the schools prior to takeover. If the EAA expands, careful steps will need to be taken to avoid including successful schools (like Thirkell) that serve needy students.