Worker Freedom in Michigan: The Road Ahead 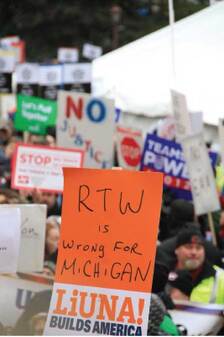 The protestor numbers in the right-to-work battle may have been exaggerated, but unions are still powerful forces to be reckoned with.

In December, Michigan joined the ranks of 23 other states that put workers and job creators above special interests. Soon unions will not be able to get workers fired for refusing to financially support them.

The near future will be confusing. Some workers will be able to exercise their rights as soon as the end of March when the new right-to-work law takes effect, while others will have to wait for their current union contracts to expire, which could take years. There is no doubt the special interests that rely on forced union dues  will try to thwart worker freedom in this state.

Michigan Education Association President Steven Cook in a Jan. 22nd email told his members that his union’s “goal is to settle, extend or modify contracts with school districts so that locals are,” as he euphemizes, “protected from the law’s negative impacts.”

If Cook is successful, teachers and other school employees with contracts that are extended before right-to-work goes into effect will need to wait until those contracts expire, or are again modified before exercising their right-to-work freedoms.

No matter how many delay tactics unions use to postpone right-to-work in Michigan, the wait will be worth it.

Workers in right-to-work states enjoy higher wage growth and, when cost of living is factored into the equation, better compensation than their counterparts in forced unionism states.

This may be another reason why unemployment is lower in right-to-work states and why these states generally have higher population growth.  Job creators see states with right-to-work laws as being better for business.

Just one example of job creators already giving Michigan a second look due to its new right-to-work status was reflected in a recent article in Site Selection, which calls itself a “magazine of corporate real estate strategy & area economic development.”

The article highlighted Brent Pollina of Pollina Corporate Real Estate in Chicago, who said right-to-work will have an effect “when there are companies who are looking for locations, Michigan will no longer be eliminated because they are not a right-to-work state.”

He predicted the state will see “a significant increase in the number of projects that Michigan receives because they are no longer being eliminated at the early stages of searches.”

Passing right-to-work legislation in Michigan was a major victory for workers’ rights and economic prosperity, but the fight is by no means over.

Besides extending the contracts of workers to prolong their wait for right-to-work Cook also recently issued a memo detailing several strategies to combat the newly passed law.

Cook’s memo stated that his union “will use any legal means at our disposal to collect the dues owed under signed membership forms from any members who withhold dues prior to terminating their membership in August for the following fiscal year.”

Besides planning to sue their own members, the memo contemplates lawsuits that will directly challenge the bill, political payback against right-to-work supporters, and an initiative that could put right-to-work on the ballot in November 2014.

Unions will have an uphill battle to defeat the law. Last November Michigan voters overwhelmingly rejected two union-sponsored ballot proposals. Voters rejected Proposal 2 by 15 points; the bill would have given government union contracts an effective veto over legislation and made right-to-work legislatively impossible. Voters also denied the Service Employees International Union the ability to force dues from home-based caregivers with the defeat of Proposal 4.

There is no surprise that unions will fight to bring back their forced dues monopoly. The fact that one of the biggest and most powerful unions in the state bluntly states that they will use “any legal means at [their] disposal” to keep collecting dues from workers who do not see the value of MEA membership vindicates Michigan lawmakers who gave union members choice and put them ahead of special interests.

The road ahead for worker freedom will not be without difficulty, but after the dust settles and right-to-work has been solidified by the voters and the courts, Michigan will truly be a more free and prosperous state.