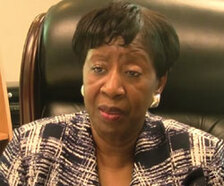 Joyce Parker was appointed emergency manager of Ecorse in 2009 by former Gov. Jennifer Granholm. “She has been a savior for our city,” according to resident William Holmes. For more information, please see www.mackinac.org/16970.

Yet another ballot measure this fall seeks to undo reforms that are saving distressed cities and school districts on the verge of bankruptcy.

Not wanting to put all their eggs in one basket, government unions are backing two proposals which would repeal Public Act 4, the Local Government and School District Financial Accountability Act known as the “emergency manager’s amendment.”

The most radical is the Protect Our Jobs Amendment. POJA would overturn legislation like PA 4 by making government union collective bargaining agreements have the power of the constitution.

Public Act 4 and the emergency managers are not ideal in a perfect world, but Michigan’s current economic situation is far from perfect.

Just in case voters are not ready to give union bosses veto power over past and future laws, unions, through a group called the “Stand up for Democracy Coalition,” are also backing a separate referendum to directly repeal PA 4.

PA 4 expanded the power of emergency managers to include the ability to amend government union collective bargaining agreements.

Under the law, managers have the ability to reorganize a locality’s government, modify or terminate municipal and school board contracts, override school board decisions, take remedial action to oversee local pensions funded below 80 percent, submit contracts over $50,000 to competitive bidding and eliminate the salary and benefits of administrative officials — the ones who created the problem in the first place.

These powers are far reaching, but are done as a last resort. PA 4 outlines early warning and review procedures before the governor can appoint an emergency manger. A municipality or school district needs to be in dire straits before such drastic action is taken.

It is true that emergency managers can, temporarily, overrule local elected officials, but that may be the only way to keep Michigan from becoming California. California’s unsustainable labor obligations caused cities like Vallejo and most recently Stockton to declare bankruptcy.

Before entering Chapter 9 (the part of the federal bankruptcy code which applies to municipal bankruptcies), Stockton’s fiscal problems forced the city to cut 25 percent of its police force and 30 percent of its fire department. The city also had to reduce pay for all of its workers by 20 percent.
In the end, the city could not even pay its vendors or make payroll.

The city cut services by so much that officials said “public safety is at a crisis level.” This could be one of the reasons Stockton’s unemployment was almost double the national average at 15.4 percent in June.

Voters in Michigan are learning from Stockton and recognizing the distasteful necessity of emergency managers.

A June poll conducted by Foster, McCollum, White and Associates, “found that 35.32% of Michigan respondents would vote to maintain Public Act 4 and only 27.30% would vote to repeal it.”

The numbers were similar across Wayne County, which is most affected by PA 4, where 36 percent of registered voters want to keep the law and only 31 percent of those surveyed want it repealed.

Detroit City Council President Pro Tem Gary Brown told the Detroit Free Press that the reason that PA 4 is not seeing a groundswell of opposition, even in his city, is because “Many Detroiters don’t care who gets the lights on. They just want their quality of life to improve,”

Brown predicted that in November he “wouldn’t be surprised if it’s put on the ballot, and it’s rejected.”

Another poll commissioned by the Business Leaders for Michigan of residents in Benton Harbor, Ecorse, Flint and Pontiac — all of which  have emergency managers — showed that the respondents did not like the idea of having a manager but felt that they were making improvements and their municipalities would be better off in a year.

Public Act 4 and the emergency managers are not ideal in a perfect world, but Michigan’s current economic situation is far from perfect. Years of mismanagement and cozy relationships between elected officials and government unions have brought many municipalities past the point of normal reform.

Voters are justifiably wary of the abilities given to these managers, but at the same time know those powers are necessary. Emergency managers are already showing they can improve situations previously thought to be impossible. It will be up to voters to decide if the benefits of the law outweigh the negatives.