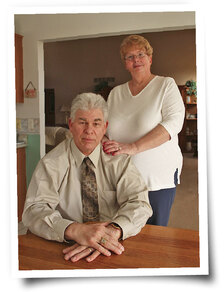 People like Rob and Pat Haynes, who were forced into a government union because they receive Medicaid assistance to care for their disabled adult children, would be at even greater risk if the “Protect Our Jobs” amendment passes.

(The following is adapted from comments Mackinac Center President Joseph G. Lehman delivered at the Detroit Regional Chamber of Commerce’s Mackinac Island Policy Conference on May 31, 2012.)

The “Protect Our Jobs” initiative is a radical constitutional amendment that makes government unions more powerful than the Legislature, allowing them to set public policy in secret negotiations with their employer that lawmakers would be powerless to override.

This amendment rigs the game in favor of the 3 percent of Michigan’s population who work in unionized government at the state, local or school levels.

Not only would this amendment lock in place collective bargaining laws for the public sector that are a burden on taxpayers, it would undo reforms such as the emergency manager law, requirements for government employees to pay a fair share toward their own health care costs and changes to teacher tenure laws that prohibit personnel decisions based solely on seniority.

If passed, it will drive up the cost of government services without making them any better and set up a rigged game designed to benefit a select few. It’s the kind of thing Michigan voters and courts have already rejected repeatedly.

“Protect Our Jobs” makes unionized government a constitutional mandate. But this amendment doesn’t stop there. It also explicitly nullifies all past and future laws related to collective bargaining, except those related to strikes.

We can’t estimate the total cost of the amendment yet. But it’s clear that at least $1.4 billion of the savings the Legislature produced last year would vanish instantly.

Michigan lagged 49 other states in economic performance for about a decade. This amendment would likely put us there again.

And the amendment won’t help union workers at private companies because their labor rules are set by federal law. New companies won’t want to move here either if the amendment keeps us from becoming a right-to-work state.

In 2010, the courts rejected the Reform Michigan Government Now amendment after the Mackinac Center found the UAW’s secret PowerPoint whose title explained their true purpose: “Changing the rules of politics in Michigan to help Democrats.”

Unionized government ensnares people who don’t even work for government. One union tried to claim home-based day care owners were government workers, and started taking dues from them. Some $4 million was taken before the scheme ended after an 18-month court battle led by the Mackinac Center Legal Foundation. And the SEIU is still skimming $30 million and counting from people, including parents, who care for their disabled children at home with Medicaid assistance.

“Protect Our Jobs” would make abuses like these more likely and much harder to undo. It’s a radical plan to rig the game in favor of the 3 percent, which makes it inherently unfair, and voters may have the chance to reject this kind of thing for the fourth time come November.