A Good Start, Policymakers. Now for the Heavy Lifting 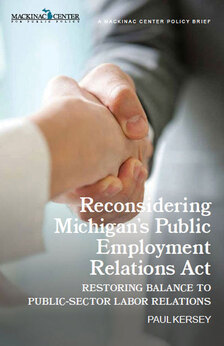 Gov. Rick Snyder and the Legislature are on a roll. In six months they’ve made real progress toward fixing Michigan. But it’s only a start. Whether they turn Michigan around or just slow its decline will depend on whether they keep pressing hard, or declare victory and coast.

Four accomplishments are especially noteworthy. The state business tax was trimmed by about $600 million overall, vastly simplified, and made fairer (by eliminating a constellation of corporate welfare-like tax incentives). Emergency financial managers now have more authority to keep unions from bankrupting schools and municipalities.

Gov. Snyder has asked school and municipal leaders to cut costs, but their hands will remain partially tied unless he delivers some of these collective bargaining changes.

Starting next year, taxpayers will subsidize only 20 weeks of unemployment instead of 26 and thereby save about $240 million annually. Lastly, the new state budget cuts spending significantly, relies less on federal subsidies, and incentivizes schools and municipalities to stop their overspending.

These accomplishments were neither perfect nor sufficient. For instance, the tax and budget changes will raise income taxes on many. No one’s taxes should be increasing while public employees are still taking home $5.7 billion more in average benefits than their private-sector counterparts.

Many Mackinac Center ideas have already found their way into law this year. Here are some of them:

Unless the Legislature and Gov. Snyder enact serious reforms to Michigan’s public-sector union law, we can expect unions to continue soaking up tax dollars that are supposed to pay for efficient, core government services.

Gov. Snyder has asked school and municipal leaders to cut costs, but their hands will remain partially tied unless he delivers some of these collective bargaining changes.

Public-sector unions push a romantic vision of collective bargaining that plays well in Michigan. But they are involved in underhanded schemes like roping tens of thousands of private day care workers into a government union so they could siphon off millions of tax dollars intended to care for low-income children. The Mackinac Center Legal Foundation sued the state when the Granholm administration and unions set up that deal, and Gov. Snyder was right to pull the plug on it in March.

Public sector unions enjoy special legal privileges that drive costs up and efficiency down in government and public schools. Gov. Snyder and the Legislature should end policies that favor unions at the expense of taxpayers.