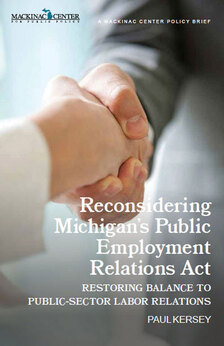 Collective bargaining in the public sector should be optional, not mandatory.

Somewhat analogously to current events in Wisconsin, Ohio and Idaho, a fierce legislative battle took place in Lansing in 1994 over changes to Michigan’s public-sector collective bargaining law, the Public Employment Relations Act. While the Michigan encounter did not involve protesters invading the Capitol or legislators fleeing to another state, it did involve a senator being summoned from a long hospital stay and set up with a bed in the lieutenant governor’s office until he could provide the tiebreaking vote. A recent court ruling reveals that one change from 1994 that led to hundreds of millions of dollars in taxpayer savings needs to be revisited in order to ensure its continued effectiveness.

Recently, despite the clarity of the law, a number of Kent County school districts agreed to collective bargaining clauses that state, “All districts agree not to privatize any KCEA/MEA unionized services for the life of this agreement.”

Public Act 112 of 1994 made it easier to determine when illegal teacher strikes were occurring, sought to prevent the MEA from vetoing collective bargaining agreements its locals negotiated and, most importantly, created a list of prohibited subjects of collective bargaining. The most significant of these prohibited subjects was a school district’s decision “whether or not to contract with a third party for 1 or more noninstructional support services.”

Before this change, the subject of privatizing could be litigated by the public employees unions, who could claim that either a school district had to bargain over whether to privatize or at least over the effects of the privatization decision. This was because Michigan’s public-sector bargaining law was modeled after the much older federal private-sector bargaining law, the National Labor Relations Act. The similarities led to many private-sector concepts being incorporated into Michigan’s public-sector bargaining statute.

But the U.S. Supreme Court has made it clear that states are not under any obligation to offer public-sector collective bargaining at all, and many states do not allow it. For those that do, there is no requirement that the public-sector bargaining laws mirror the NLRA.

There are many reasons a state might seek to limit public-sector collective bargaining, including: (1) a public employer is not guided by the profit motive and lacks the discipline that the market would impose through requiring price increases for increased labor costs; and (2) public employees make up a significant portion of the electorate and can often elect who sits across from them at the bargaining table to the detriment of the general public.

The 1994 legislation was an attempt to alter the public bargaining law to protect taxpayers from its systemic faults. Gregory M. Saltzman, an economics and management professor at Albion College, and Shlomo Sperka, who for 15 years directed what is now known as the Michigan Employment Relations Commission, explain:

The intent of the legislature in imposing these restrictions . . . was to enhance school management’s power in dealing with unions. Ironically, their view was that the best way to do this was to limit management’s negotiating authority, based on the assumption that administrators had to be protected against their own inclination to grant union demands.

Largely as a result of this law, approximately 48 percent of Michigan school districts currently privatize either transportation, custodial or food services.

Recently, despite the clarity of the law, a number of Kent County school districts agreed to collective bargaining clauses that state, “All districts agree not to privatize any KCEA/MEA unionized services for the life of this agreement.” Five taxpayers filed a lawsuit over the clauses and were represented by the Mackinac Center Legal Foundation. While the judge expressed concern that illegal language was included in the agreements, he held that taxpayers could not seek its removal. This has the effect of leaving the enforcement of the bargaining law in the hands of the very parties that violated it. The school districts claim that they included the illegal language so as to get bargaining concessions from the union, but acting illegally if the price is right is not what we typically want from our public officials.

Public-sector collective bargaining reform is an important national topic. At a minimum, the Michigan Legislature should find a way to make certain that privatization cannot be bargained away. More importantly, it should question whether it can trust public money with numerous local actors who have shown a propensity to accede to union demands even when those demands run contrary to Michigan law.

Patrick J. Wright is director of the Mackinac Center Legal Foundation at the Mackinac Center for Public Policy, a research and educational institute headquartered in Midland, Mich. Permission to reprint in whole or in part is hereby granted, provided that the author and the Center are properly cited.