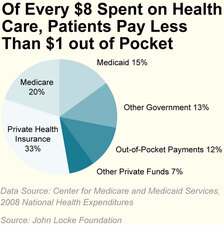 Nationwide, nearly three of every five voters in this year’s election want at least part of the new federal health care law repealed, and four of every five Republican voters favor outright repeal. While Governor-elect Rick Snyder and state legislators cannot repeal a federal law, there are steps they can take to delay or mitigate for the state the worst aspects of the Patient Protection and Affordable Care Act (PPACA).

Attorney General-elect Bill Schuette has already made an important contribution with his pledge to continue Michigan’s participation in the multi-party lawsuit against the individual mandate and federal control of already stressed state budgets. Here are some specific steps the governor and Legislature can take.

Legislators, for their part, could add Michigan to the growing list of states that have protected their residents’ right to decide how they get health care.

Stop Federal Grants: Gov. Snyder can add his support to the lawsuit for the rhetorical value, but more important will be his management of the executive branch. Outgoing Minnesota Gov. Tim Pawlenty ordered state agencies not to seek federal grants related to the health care overhaul and to delay its state implementation. Gov. Snyder can do the same by requiring that any departmental grant applications related to health care get his explicit approval.

No Exchange: Looking ahead to 2014, Gov. Snyder can mitigate one of the new law’s biggest burdens by choosing not to create a state health insurance “exchange,” instead allowing the federal government to step into that breach. The federal insurance mandates are so onerous that no amount of state-level tinkering with the details of the exchange may be able to save residents’ ability to purchase reasonably priced health insurance.

Because of the new law, employers and individuals already are facing higher premiums, searching for new policies because their insurer has either dropped their policy or gotten out of the market altogether, or are getting refunds in anticipation that their policies won’t exist in a few years (and so require smaller future claim reserves). The promise that “If you like your current insurance you can keep it” doesn’t apply if it’s no longer available.

Opt Out of Medicaid: Regardless of whether the state or the federal government runs the “exchange,” Michigan could save more than $30 billion between 2013 and 2019 by dropping its Medicaid program. Current recipients would actually get better insurance and expanded access to care if transferred to the federally subsidized coverage provided through the exchange.

Exiting Medicaid would also alleviate a burden on hospitals, since Medicaid recipients end up in the emergency room more often than the uninsured and nearly three times as often as people with private insurance.

Guarantee Choice: Legislators, for their part, could add Michigan to the growing list of states that have protected their residents’ right to decide how they get health care. Missouri, Montana, Oklahoma and Virginia either have a law or a constitutional amendment modeled on Arizona’s Freedom of Choice in Health Care Act. If it survives inevitable legal challenges, the measure would prohibit authorities from penalizing individuals for choosing to be uninsured or paying for care a different way, and would also protect doctors from penalties based on how they get paid for their services. Regardless of federal court rulings, putting the measure into the Michigan Constitution would also prevent future legislatures from imposing a state-level individual insurance mandate, or a Canada-like ban on private medicine.

Require Legislative Approval: Legislators should revive the separation of powers by passing a bill that forces the key decisions on a state health insurance exchange, insurance regulations and Medicaid changes to get legislative approval in addition to the governor’s signature. Outside industry groups are already working with executive agencies to lay the groundwork for these regulations, so the new Legislature should act quickly.

Question Authority: Finally, legislative committees need to get answers from the Obama administration and state health care officials on the broad implications of the new law for Michigan and the state budget, particularly Medicaid. Legislators need to hear from constituents who have lost their insurance, employers who are paying higher premiums, insurers that are dropping specific lines or exiting the business altogether, and doctors who are opting out of insurance. The committees should also bring in policy experts who can explain the market-based, patient-directed policy changes that would accomplish the stated goals of the current law.

These stories and alternatives should finally receive the hearing they were denied during the congressional rush to thwart the will of voters.

Joseph Coletti is director of Health and Fiscal Policy Studies at the John Locke Foundation, a state-policy think tank based in North Carolina. The Mackinac Center for Public Policy is a research and education institute headquartered in Midland, Mich. Permission to reprint in whole or in part is hereby granted, provided that the author and the Center are properly cited.