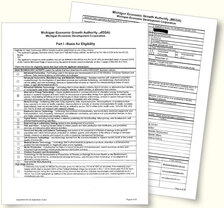 In November and December 2009, a corporation called GlobalWatt Inc. applied to the Michigan Economic Growth Authority for two different types of state incentives for a new solar module plant in Saginaw. As a result of these and other incentives, worth as much as $42 million, 500 new direct jobs were promised for the Saginaw area. Both deals were granted by MEGA.

We have produced evidence, however, suggesting that on two MEGA applications GlobalWatt misrepresented information critical to clinching the incentive deal. The misinformation relates to a competing incentive offer from Corpus Christi, Texas, and an alleged offer from the state of Texas. The first application was for a MEGA "high technology business tax credit," and was signed by GlobalWatt chairman and CEO Sanjeev Chitre on Nov. 12, 2009.

Empirical studies and other evidence highlight the futility of offering special favors to a privileged handful of investors.

To apply for these credits, companies must describe the "competitive disadvantage" that makes locating in Michigan unattractive save for state incentives. GlobalWatt's submission explained they were "considering Texas" as a location for the new manufacturing facility, where "both the state and local government have offered substantial upfront cash incentives sufficient to fund a module lines [sic] in the first year, and, recruit and train employees." (Emphasis added.)

Local and state economic development officials in Texas, however, have informed the Mackinac Center that no upfront cash was offered to the company. GlobalWatt did request incentives from both, apparently including upfront cash from the state at least.

In addition, the local government referred to was Corpus Christi, whose Regional Economic Development Corp. offered a $2.8 million incentive package in June 2009. However, this offer was contingent on GlobalWatt meeting a series of performance deadlines, including buying or leasing a building by the end of October 2009. The company missed that deadline, perhaps because it had decided on Michigan.

GlobalWatt had therefore in effect forfeited the Corpus Christi offer about six weeks before signing the Nov. 12, 2009, MEGA "high technology" credit application, which suggested that this offer was still on the table.

On Dec. 8, 2009, GlobalWatt signed a second application for a different type of incentive, a Brownfield Redevelopment Michigan Business Tax Credit. In this application, the company also made claims about Texas incentive offers that "included up-front cash for assistance in purchasing and installing machinery and equipment and recruitment, training, and hiring of employees." Once again, according to the officials involved, no upfront cash had been offered by Texas.

Moreover, in a Nov. 17, 2009, letter to Chitre — almost three weeks before he signed the Michigan Brownfield credit application — Roberto De Hoyos, director of the Texas Business Development Fund, wrote, "[Y]our application has been reviewed and at this time the decision was made to decline request for use of Texas Enterprise Fund assets." Texas officials assure the Mackinac Center that GlobalWatt was denied because they were just "not a good fit" for the state fund.

These misrepresentations are not simply administrative details. Michigan law prohibits making a "false claim for credit or refund, either in whole or in part." Violations are a felony punishable by up to five years in prison and a $5,000 fine.

As in the recent RASCO and Hangar42 scandals, the possible impropriety here could very easily have been detected had MEDC staff exercised due diligence. The RASCO embarrassment is strong evidence for this conclusion: A refundable tax subsidy worth $9.1 million was granted to what may have been the fictional construct of a convicted embezzler on parole. Richard Short stood proudly with the governor at a press conference where she touted his alleged new jobs for Michigan.

The Hangar42 film subsidy deal provides more evidence: Last February, Gov. Jennifer Granholm announced with great fanfare the opening of a major film studio thanks to an "assignable" tax credit worth as much as $10 million. A Mackinac Center investigation led to the arrest of the alleged buyer on a fraud charge, now pending in Kent County.

Empirical studies and other evidence highlight the futility of offering special favors to a privileged handful of investors, rather than creating an attractive climate for all job providers through fundamental reforms of Michigan's tax, spending, regulatory and labor law environments.

At a minimum, the state should put its grossly obese corporate welfare bureaucracy on a strict diet that includes plenty of fresh transparency.

Michael D. LaFaive is director of the Morey Fiscal Policy Initiative and Kathy Hoekstra is Communications Specialist at the Mackinac Center for Public Policy, a research and educational institute headquartered in Midland, Mich. Permission to reprint in whole or in part is hereby granted, provided that the author and the Center are properly cited.