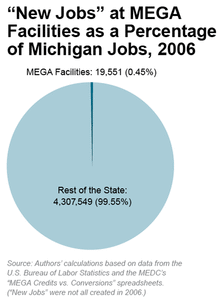 A new study from the Mackinac Center lays out the reasons for eliminating the Michigan Economic Development Corp., the bureaucracy that presides over this state's fleet of targeted tax breaks and business subsidy programs. First and foremost, doling out discriminatory favors to a tiny handful of "winner" firms simply does not and cannot work to restore an ailing economy.

Evidence of this point can be seen in the MEDC's flagship program, the Michigan Economic Growth Authority. MEGA offers tax credits to large business projects and issues press releases boasting of all the jobs to be created by those firms as evidence that the agency's central planning strategy is working. Gov. Jennifer Granholm built the obligatory "good news" portion of her 2009 State of the State address around a number of these press release tidbits.

Clearly, the economic policies that have dominated the political landscape for the past decade have been a colossal failure.

The record, however, shows that most of the promised jobs never come to pass. Specifically, the Mackinac Center analysis found that job promises contained in MEGA tax credit agreements are actually more than triple the eventual job counts: For every 1,000 jobs that the MEDC announces, only 294 are created.

MEGA has awarded over $324 million in tax credits since 1995 — out of $3.3 billion offered — and has already ramped up its operations. In just the first six months of 2009, MEGA entered into agreements promising up to $1.7 billion in future tax credits.

MEGA does not improve Michigan's economic prospects, because
it does not change the institutions that govern Michigan's economy.
Instead, it changes the rules only for a small percentage of Michigan businesses. Jobs "created" through MEGA deals equal just 0.45 percent of jobs in this state. True, this is only one of the state's programs, and it offers dozens more at the state and local level. But experience with other programs shows they are also questionable.

Consider the Michigan film incentive, the country's largest subsidy to the movie industry, designed to relocate Hollywood to Michigan. The state began the incentive last year by giving film and television producers up to 42 cents in tax credits for every dollar they spend in Michigan, meaning that a company can lose almost half of its Michigan expenditures and still break even. Since the film incentive's creation last year, it has been an expensive program with little transparency. State tax credits to producers amounted to $48 million in 2008 and may reach $200 million annually in the near future. Nevertheless, the number of jobs the Michigan Film Office claims to have created amounts to a rounding error, especially considering that the number of jobs lost due to the cost of the program remains unconsidered.

Policymakers need to put away these gimmicky programs and focus on addressing Michigan's problems. Since the MEDC was created, 16 percent of Michigan jobs have disappeared. Michigan is the only state that produces less than it did 10 years ago. It is now a poor state — incomes are 11.2 percent less than the national average. Clearly, the economic policies that have dominated the political landscape for the past decade have been a colossal failure.

Michigan should scrap this "economic development complex" and adopt broad-based reforms like eliminating the Michigan business tax, reining in the Department of Environmental Quality and enacting a right-to-work law. Reforms like these would improve the climate for the vast majority of job providers in this state, rather than just a select few.

Eliminating targeted tax breaks and subsidies has been decried as "unilateral disarmament." However, the creation and later dismantling of the Michigan Broadband Development Authority shows that eliminating economic incentives goes unnoticed by the larger business community. Unilateral disarmament does no harm when you're shooting blanks.

The inability of programs like the MBDA, MEGA and the Michigan film incentive to improve Michigan's poor economic situation only shows that the economic development game is more about political development than helping
the state become more prosperous. In contrast, policies involving a fair field and no favors would send a signal to business leaders nationwide that would speak louder than any Jeff Daniels advertisement.

James M. Hohman and Michael Hicks are, respectively, co-author and contributor to "The Michigan Economic Development Corporation: A Review and Analysis," a study recently published by the Mackinac Center for Public Policy, a research and educational institute headquartered in Midland, Mich. Permission to reprint is hereby granted, provided that the author and the Center are properly cited.