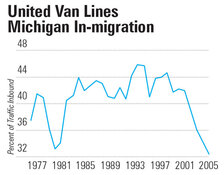 Michigan continues to be the number one outbound state for United Van Lines, with residents leaving at about a 2-to-1 ratio compared to in-bound migration.

When it comes to taxation, people are not sheep passively waiting to be sheared. Human beings modify their behavior to improve their well-being, whether that involves minimizing tax burdens or maximizing a wide mix of other opportunities.

Human migration patterns can be revealing. What makes people willing to move? Given that the U.S. Census Bureau reported that between July 2006 to July 2007 Michigan lost 30,500 people — one of only two states in the nation to lose population — the question becomes a vital matter of public policy. Knowing where those people went and why they chose those locations may help answer it.

The Mackinac Center has long recommended a “Big Three” of tide-turning policies: Eliminate the Michigan Business Tax, prohibit employers from mandating union membership as a condition of employment and rein in oppressive regulation.

To gain insight on these migrations patterns the Mackinac Center has long used customer data from America’s largest household moving van company, United Van Lines. A statistical analysis of UVL and U.S. Census data has shown the two to be very highly correlated. That makes UVL data a leading migration indicator of sorts.

It appears that over the past three years the rate at which Michigan’s residents are leaving the state has increased. Through 2007, UVL reported that Michigan was its number one "outbound" state, with 67.8 percent of its Michigan-related traffic moving elsewhere. That’s an all-time record for Michigan, beating our 1981 record of 66.9 percent.

UVL figures through the first six months of 2008 show that Michigan not only continues to "lead" the nation in outbound moves, the margin over number-two North Dakota has widened to 5.1 percentage points. Our midyear 2008 outbound traffic rate of 65.9 percent may appear down from the full-year 2007 figure, but that’s likely just a seasonal effect: In the last three years the full-year figure exceeded the midyear-one. For example, the 2007 midyear rate was 64.6 percent, but over the full 12 months the outbound level ended up at 67.8 percent. A similar late-year spurt would put Michigan’s full-year 2008 outbound rate at over 69 percent.

This fall the Mackinac Center will release its own exhaustive study of U.S. and Michigan migration from 2000 through 2005, which will include a sophisticated econometric analysis. Here’s a sneak peak: Among other findings, we’ve learned that Americans tend to move to states that have lower personal taxes, greater labor market flexibility and more days of sunshine.

For example, our model found that, on average, for every 10 percent increase in personal taxes, 1,900 people leave a state each year thereafter. Michigan has other factors that make it far from average, so the 11.5 percent increase in personal income taxes imposed late in 2007 suggests that ensuing population losses may far exceed this estimate. We also found that, for every five days of extra sunshine in a destination state, 500 people leave their state of origin each year. This is consistent with other literature in the field showing that that good weather is an attractive amenity.

A study by scholar Jordan Rappaport showed that an increase in the mean January temperature from 29 degrees to 54 degrees "is associated with faster [population] growth of 1.3 percent a year." Or for the colder state, with slower if not negative growth. Population growth attributed to Michigan’s weather ranged between negative 1.5 percent and 0.0 percent from 1970 to 2000.

It may seem a "no brainer" that people prefer to live where the weather is nicer, but consider just what that means for public policy choices in a state with a less salubrious climate if it wants to maintain a thriving population: Lansing politicians can’t control the climate, so they darned well better avoid doing things that give people (and job providers) extra incentives to leave.

The Mackinac Center has long recommended a "Big Three" of tide-turning policies: Eliminate the Michigan Business Tax, prohibit employers from mandating union membership as a condition of employment and rein in oppressive regulation.

Unfortunately, Michigan’s lawmakers have so far been impervious to facts. Rather than lowering the cost of working, living and investing in Michigan during our accelerating one-state recession, they’ve hiked taxes by $1.4 billion, are threatening to re-monopolize the electrical industry and increased the regulatory gauntlet just run to make use of groundwater.

Failure to reverse the policy course determined by Lansing in recent years means that more residents will take their money and talent and run elsewhere in pursuit of greater economic and personal opportunities. Michigan’s economic death spiral will continue unless and until policies are adopted that give people a reason to stay.

Michael D. LaFaive is director of the Morey Fiscal Policy Initiative at the Mackinac Center for Public Policy. Michael Hicks, Ph.D., is director of the Bureau of Business Research at Ball State University in Indiana, and an adjunct scholar with the Mackinac Center for Public Policy, a research and educational institute headquartered in Midland, Mich. An edited version of this commentary appeared in the Aug. 13, 2008, Detroit News. Permission to reprint in whole or in part is hereby granted, provided that the authors and the Center are properly cited.