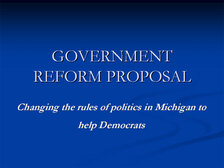 Slide one and title of the “Reform Michigan Government Now” PowerPoint presentation.

The Mackinac Center for Public Policy has obtained a document outlining details of what would become the "Reform Michigan Government Now" ballot initiative. The document, in the form of a Microsoft PowerPoint presentation, bears the blunt title: "GOVERNMENT REFORM PROPOSAL: Changing the rules of politics in Michigan to help Democrats."

According to the UAW Region 1-C Web site where the document was originally found,* this presentation was given to local union officials at a leadership conference in late May or early June. UAW officials have not returned our calls, and both the presentation and a brief article that referred to the presentation have since been removed. The entire presentation can be accessed here.

To the extent that this document is what it appears to be, it leaves little doubt that the Reform Michigan Government Now ballot initiative is a partisan power play.

While it’s not clear who delivered the 34-slide presentation, it begins by painting a grim picture for the Democratic Party in Michigan. "Democrats have been reduced to a de-facto permanent legislative minority in Lansing, especially since 1990," the presentation begins. The document indicates that obtaining favorable Democratic districts would require Democratic control of Michigan’s House, Senate, governorship and Supreme Court. The "problem" is that the Democrats would be unlikely to control future redistricting, and without favorable redistricting another "Engler era" is "quite possible."

After asserting that Democrats are unlikely to achieve control of redistricting through conventional means, i.e. the democratic election of candidates, the presentation outlines a series of changes to remove "structural obstacles to Democratic control of state government." Among the goals are the establishment of a bipartisan commission to redraw legislative boundaries and the removal of two Supreme Court justices and seven Court of Appeals judges with the intent of establishing a partisan advantage.

To make these changes more palatable to the electorate, the presentation calls for them to be combined with other alterations to state government, including a reduction in lawmakers’ salaries, a decrease in legislative seats and the elimination of some executive branch departments, state boards and commissions. The amendments suggested in the PowerPoint presentation match up precisely with the terms of the "Reform Michigan Government Now" submitted for the November ballot and now under review by the State Board of Canvassers.

The document also includes polling data and a $4.9 million budget for passing the initiative, which is described as "less than half the cost of trying to beat an incumbent GOP Supreme Court Justice." The presentation concludes with the prediction that "[i]f the proposal passes, it will reduce the cost and increase the prospects of winning the State Legislature every cycle."

To the extent that this document is what it appears to be, it leaves little doubt that the Reform Michigan Government Now ballot initiative is a partisan power play. The most important features of the scheme are the redistricting commission and the removal of two Republicans from the Michigan Supreme Court. Nearly everything else in the proposal seems to be calculated to make the entire package more attractive to voters.

The Mackinac Center is a nonpartisan policy research organization committed to informing Michigan residents about the content and likely consequences of legislation and ballot proposals. While we have no objections to partisan politics as such, it is essential to call attention to partisan ploys that are presented as neutral good-government reforms.

The PowerPoint file also gives a troubling glimpse into the thinking of UAW officials. Rather than working to guide their members through a difficult economy, they appear to be pursuing a crassly partisan and breathtakingly cynical political maneuver. At a time when the auto industry in Michigan is undergoing difficult changes, the UAW would be well-advised to focus on its members and leave politics to the politicians.

Paul Kersey is director of labor policy for the Mackinac Center for Public Policy, a research and educational institute headquartered in Midland, Mich. Permission to reprint in whole or in part is hereby granted, provided that the author and the Center are properly cited.

* The PowerPoint presentation was originally discovered by Mackinac Center Labor Research Intern Jim Vote. That story is told in more detail at "An Intern’s Service to Michigan."