Changing Direction. Are We There Yet? 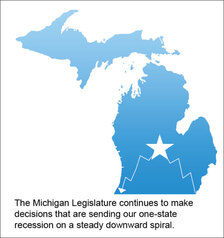 As Michigan’s unemployment rate recently climbed to 8.5 percent, budget officials estimated the state treasury will collect nearly $400 million less next year than what had been projected just a few months ago, despite the huge new business and income taxes the Legislature imposed in late 2007.

Those tax hikes were expected to bring the treasury an additional $1.4 billion. The falling revenue projections prove the obvious: When government plots to soak the taxpayer, many taxpayers don’t wait around to get wet. They leave the high-tax jurisdiction, and new businesses never locate there in the first place.

Michigan’s political establishment has a proven ability to postpone the hard work of truly reforming and downsizing state government.

Nevertheless, Michigan politicians pretend this doesn’t happen — even though 30,500 Michiganders left the state last year — and that there are no consequences to making Michigan’s tax and regulatory climates ever more burdensome. Perhaps this "hostage-holding" mentality accounts for the disconnect between the actions of the current Legislature and the real economy.

In 2007, in addition to those tax hikes, lawmakers adopted a complex new business tax that shifted the burden from declining industrial and manufacturing firms to firms in growing areas. The "sticker shock" as thousands of job providers discover huge new tax liabilities is causing many of them to reassess the continuing viability of Michigan as a place to do business.

So far this year, the Legislature has been busy with measures to increase electricity prices (plus give Detroit Edison and Consumers Energy their monopolies back), to make for-profit health insurers pay a huge subsidy to Blue Cross Blue Shield (which already controls 70 percent of that market), and to effectively throw away one of the few economic advantages Michigan enjoys — abundant water resources — by forcing commercial and industrial enterprises to run an incredible regulatory gauntlet if they use groundwater.

Pretending to be "doing something" to help is not the same as genuinely doing helpful things, like cutting taxes and reducing regulations. Instead, there has been a rush to grant new subsidies and discriminatory tax breaks to particular companies and industries selected by state government planners who believe they know best which businesses Michigan needs. This is despite a recognition among economists that such targeted government giveaways or tax breaks don’t improve a state’s economy.

The richness of these latest corporate welfare schemes is breathtaking and suggests desperation among lawmakers who lack the will (and the proper incentives) to modify their dysfunctional behavior. For example, $100 million of next year’s projected deficit is because the Legislature created an open-ended window from which Hollywood moguls who shoot a film here can make withdrawals from the state treasury. Another handout to a "sexy" high-tech firm reportedly will cost some $900,000 per job created! (If every employer in the state got the same deal the cost would exceed $4 trillion, or one-third of all U.S. economic output.)

There is also a push for more public works boondoggles. The House has passed measures to borrow more than $800 million for state and university construction projects and spend another $300 million of borrowed money to replace large urban high schools with smaller ones. Another recent proposal would incur $1.3 billion in new debt for environmental and recreation projects.

This credit-card budgeting has the same effect as adding a few more belts of booze to "cure" Michigan’s recession hangover. Paying off those bills in the future will drain the treasury and generate pressure for more tax hikes, scaring away yet more investors and entrepreneurs from the Great Lakes State.

Michigan’s political establishment has a proven ability to postpone the hard work of truly reforming and downsizing state government — necessary prerequisites to the tax cuts and regulatory reforms that are the only things that can save this state’s economy. That ability is not bottomless, however. Every now and then the population throws off their blinders and changes the incentives for policymakers by demanding a new direction.

Are we there yet?

Jack McHugh is senior legislative analyst for the Mackinac Center for Public Policy, a research and educational institute headquartered in Midland, Mich. Permission to reprint in whole or in part is hereby granted, provided that the author and the Center are properly cited.