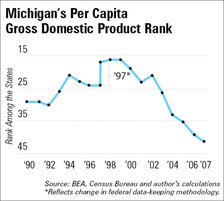 (Note: This is an edited version of a commentary that first appeared in The Detroit News on June 11, 2008.)

Seeds of reform are often planted during times of crisis, but these reforms are not being advanced successfully. Our Legislature may be among the worst in Michigan history. It has and continues to impose everything from a $1.4 billion tax increase to a likely electricity rate hike to a massive regulatory expansion in the area of groundwater use — all policies that will do more harm to Michigan’s economy and chase more people from the state. No amount of cheerleading from Lansing, new exotic subsidies or discriminatory "economic development" programs will fix our hostile business climate.

The question that apologists for the status quo have failed to answer is why investors and job providers increasingly avoid Michigan.

From 2006 to 2007, Michigan’s economy contracted by 1.2 percent, besting only Delaware’s, which declined by 1.6 percent. Our nominal per-capita GDP ranking among the states now stands at 41st, down two spots from this time last year and down from an all-time high of 16th in 1999. This data comes just months after the federal government reported that the income of Michigan residents now stands 9.1 percent below the national average — even worse than during the Great Depression. The implications for Michigan, which is effectively suffering from a one-state recession, may be profound.

People are the critical variable for economic growth. People create, consume, invest and produce, as well as pay taxes that support vital functions of government. But Michigan’s poor economy is chasing away our human resources. According to the U.S. Census Bureau, Michigan lost 30,500 residents and was only one of two states in the union to lose population in net terms from July 2006 to July 2007. We are not surprised by these departures and, based on our newest research, believe the problem will get worse.

Research for an upcoming Mackinac Center study demonstrates that, on average, from 2000 through 2006, Americans tended to move to states with lower personal tax burdens, more flexible labor laws, abundant sunshine and higher expected future incomes. Does that sound like Michigan?

Ominously, these numbers were calculated before the state raised the personal income tax by 11.5 percent. Our model shows that for every 10 percent increase in the average personal tax burden, some 1,900 people leave their state of residence annually thereafter. Our model also shows that more than 500 people move to another state for every 5 additional days of sunshine it can claim over the states from which people depart.

These moves do not occur in a vacuum. They have a real impact on the future as people pack up their possessions, talent and children and leave the state. The Niles Public Schools superintendent recently told the Niles Daily Star that enrollment is down approximately 42 students this year and most of them moved out of state. The Senate Fiscal Agency projects that the number of school-age children in Michigan will decline by 25,000 over the next year.

If this weren’t bad enough, the Legislature’s response has been to stem Michigan’s economic decline with more economic development programs, such as refundable tax credits for movie makers and other "sexy" businesses. But Legislators are doing so in the face of significant anecdotal and empirical evidence that such programs are ineffectual.

In 1999 Gov. John Engler created the Michigan Economic Development Corp., claiming it would help create and keep good jobs in Michigan. But that year was the high point of our economic vitality. The state’s jobs creation department has since presided over one of the worst periods of economic decline in Michigan history. Moreover, it has done so while the rest of the nation enjoyed several years of robust growth. From 1999 through 2007, the United States averaged 2.5 percent real GDP growth. By contrast, Michigan shrunk by one-tenth of a percentage point.

Yes, the restructuring of the Big Three automakers is hitting Michigan harder than other states, but the cause of our persistent economic malaise goes much deeper. The question that apologists for the status quo have failed to answer is why investors and job providers increasingly avoid Michigan. Perhaps they view Michigan as a bad place to do business because of its toxic tax, regulatory and labor climates. Until those are fixed, all the subsidies and "Pure Michigan" advertising campaigns in the world won’t save us. If Michigan wants to grow again it should dramatically reduce its tax burden, pass a right-to-work law, write more rational environmental regulations and adopt scores of other ideas proposed by Mackinac Center scholars over the past 20 years.

Michael D. LaFaive is director of the Morey Fiscal Policy Initiative at the Mackinac Center for Public Policy. Michael Hicks, Ph.D., is director of the Bureau of Business Research at Ball State University in Indiana, and an adjunct scholar with the Mackinac Center for Public Policy, a research and educational institute headquartered in Midland, Mich. Permission to reprint in whole or in part is hereby granted, provided that the authors and the Center are properly cited.