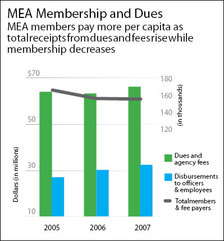 Throughout Michigan there is growing interest in amending the state constitution to allow workers to affiliate voluntarily — rather than out of compulsion — with a labor union. The largest school employees union in Michigan, the Michigan Education Association, actively opposes letting current and potential school employees choose whether to pay dues or fees to the labor organization. Union officials’ hostility toward this idea may be motivated by a fear that school employees would be less interested in MEA membership if they knew more about what their union affiliation was getting them. Based on a recent MEA report, the affiliation may be getting less for members this year than last.

The MEA, like many unions, must file an annual "LM-2" report with the U.S. Department of Labor, a requirement intended to keep the union accountable to its members. Some form of accountability is critical since the law requires union membership as a condition of employment in most Michigan school districts.

Given falling membership, one might expect the total amount of dues and fees collected from MEA members to decrease as well. Surprisingly, total revenue from dues has climbed from $63.3 million in 2006 to $66.7 million in 2007, an increase of 5 percent. This increase follows a slight dues decrease of about $1 million from 2005 to 2006.

Benefiting from salary increases over the previous year, MEA President Iris Salters in 2007 received a base salary of $198,945, while executive director and former union president Luigi Battaglieri’s salary came in at $195,270. These salaries are in addition to any remuneration for sitting on the boards of Blue Cross Blue Shield of Michigan, for which Salters was paid $30,152 in 2005, and of Delta Dental Plan of Michigan, which paid Battaglieri more than $18,000. (Both Salters and Battaglieri report their participation on these boards in forms filed with the U.S. government to disclose actual or potential conflicts of interest.)

Moreover, average teachers’ salaries — admittedly among the highest of any state — are dwarfed by those of many union officials and bargainers. Consider the Brighton Area Schools, for instance, where heated negotiations are ongoing. Based on the latest data available from the state and the 2007 LM-2, the MEA Uniserv director’s salary is $102,271, while the average teacher salary in Brighton in 2006 was $59,061, above the state average of $54,739, but more than $40,000 below the Uniserv director’s salary. Similar gaps can be found statewide.

Under free-market conditions, the MEA union employees would merit congratulations for providing services for which their members are willing to pay. Unfortunately, this is not the case since members who want to continue school employment have no choice but to pay the dues and fees that fund such salaries.

Given this generous compensation, MEA members might wonder whether they’re getting what they’re paying for, which presumably is effective representation in contract negotiations. They may be disheartened to learn that the percentage of hours that MEA employees spent on "representational activities" decreased 4 percent from 2006 to 2007. On average, union employees spent 41 percent of their time representing members, according to their own report.

This means that each MEA member is shouldering more of the burden for the union’s operation. In 2005, the average dues and fees per member or fee payer was $390. Today, it is more than $420. The per-capita payment increase coincides with a self-reported decrease in time spent on the union’s primary purpose, member representation.

If MEA members are unsatisfied with this picture, they may want to question their union officials’ truculent opposition to allowing them to choose MEA representation. If the benefits of affiliating with a union are as clear as some say they are, why is the MEA afraid to let professionals decide for themselves — based on the MEA’s own reports about union spending and activities — whether the benefit of membership is worth the price?

Dr. Ryan S. Olson is director of education policy for the Mackinac Center for Public Policy, a research and educational institute headquartered in Midland, Mich. Permission to reprint in whole or in part is hereby granted, provided that the author and the Center are properly cited.