The Not So Good Life 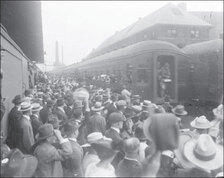 Americans, in general, have long been optimistic by nature, endowed with the conviction that each successive generation will improve upon the last. But this buoyancy is now being tested by incessant predictions of environmental doom. Hardly a day goes by without a pronouncement on how the past was so much better and how much worse the future will be.

In the words of author Otto L. Bettmann, "The Good Old Days — They Were Terrible!"

By the standards of the last century, air quality today is excellent — notwithstanding the claims of environmental activists.

That’s the title of Bettmann’s engaging book about the foul realities of life a century ago. Drawing on pictures from his New York archive of 3 million photographs and prints, he firmly dispenses with the twisted nostalgia that today warps too many Americans’ outlook on modern times. Simply put, the environment a century ago was not Eden, nor has it all gone to hell ever since.

The following excerpts from Mr. Bettmann’s book offer some much-needed perspective about the living conditions that existed long before we began worrying about gas guzzlers, urban sprawl or renewable energy.

Although now blamed for all matter of ills, the advent of the automobile dramatically improved the environment. According to Bettmann, there were some 3 million horses in American cities at the dawn of the 20th century. "The healthier ones each produc(ed) between twenty and twenty-five pounds of manure a day. These dumplings were numerous on every street, attracting swarms of flies and radiating a powerful stench. The ambiance was further debased by the presence on almost every block of stables filled with urine-saturated hay. During dry spells the pounding traffic refined the manure to dust, which blew ‘from the pavement as a sharp, piercing powder, to cover our clothes, ruin our furniture and blow up into our nostrils.’"

Runaway horses were all too common. As Bettmann tells it, "The havoc killed thousands of people. According to the National Safety Council, the horse-associated fatality rate was ten times the car-associated rate of modern times."

Some among us pine for the days when Americans relied more on mass transit than the sports utility vehicle. But as Bettmann describes it, the streetcar "was a passenger’s inferno and a pick-pocket’s paradise … In winter the streetcar became a rolling icebox … Streetcar fares cost low-income travelers almost 10 percent of their pay." The elevated trains that debuted in New York in 1868 weren’t much of an improvement, Bettmann says: "Ugly, dirty, depressing, the El became a blight … Aside from the smoke and dust, the rattling, screeching trains made buildings adjacent to the tracks tremble and created ‘a noise so exasperating that it amounted to positive pain.’"

By the standards of the last century, air quality today is excellent — notwithstanding the claims of environmental activists. "Smoke and acrid vapors smothered the industrial cities of the post-Civil War U.S.," Bettmann says. "(A) number of doctors spoke of the violence of the stenches; of oil refineries endlessly puffing black smoke ‘to produce sickness and depression;’ of acid fumes ‘irritating lungs and throat;’ of odors causing ‘an inclination to vomit.’"

Country life was no picnic, either. Although suburbs are frequently maligned these days for having supplanted the family farm, "images of idyllic simplicity" are grossly inaccurate, Bettmann says. "The farmer and his family toiled fourteen hours a day merely to sustain themselves … In place of a neat rose garden, an expanse of muck and manure surrounded the farmhouse, sucking at boots and exuding a pestilential stench that attracted swarms of flies, ticks and worms to amplify the miseries of man and beast. The elemental task of survival precluded any concern for hygiene or sanitary installations. And the punitive winter brought with it isolation and terrible loneliness."

It may well be that, like us, our grandfathers also longed for the good old days. But as Bettmann concludes: "Even if we cast but a cursory glance at the not so good old days and bring them into alignment with our own, we will find much to be grateful for. We are going forward, if but slowly. This fact should move us to view the future in less cataclysmic terms — the future that will see man, in Faulkner’s words, ‘not only endure but prevail.’"