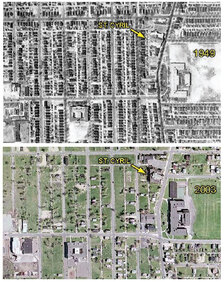 Top photo:
A 1949 aerial photo of a Detroit neighborhood, including St. Cyril Catholic Church, speaks to better days when the Motor City was a magnet for people and job providers.
Bottom photo:
The same neighborhood in 2003 shows “rural sprawl.” Despite the best efforts of officials to revive Detroit’s fortunes, the city’s population has declined by 50 percent since the 1950s.

The Renaissance Center in downtown Detroit turns 30 years old this year. The complex opened its first phase in March 1977 and was officially dedicated by city dignitaries on April 15 of the same year. The people of Michigan were excited by the project, which was conceived as a facilitator of urban renewal. The hope was that such a large project would draw more investment, business and, ultimately, people back to the city, reversing years of decline.

It was not to be. Rather than try a different tack, however, people continue to champion big and dramatic projects to reinvent or reinvigorate the Motor City. They should not. The city needs to fix its fundamentals first.

The word "renaissance" has been used and misused with reference to alleged city comebacks too many times to recall. Indeed, the $350 million (in 1970s dollars) "Renaissance" Center was supposed to anchor Detroit’s revival. According to The Detroit News, on unveiling a plaque dedicated to the building’s private financiers, Henry Ford II (who conceived the Center) said, "Detroit has reached the bottom and is on its way back up."

In 1996, the Center was sold to General Motors for just $76 million, a fraction of what it cost to build. It is difficult to overcome the message such a return on investment sends to entrepreneurs and other investors. The failure of the Renaissance Center to generate an actual renaissance in the Motor City should have undermined municipal leaders’ faith in the power of big symbols.

In the 1980s it was the $200 million People Mover that was touted as the next big thing to revive Detroit. Leaders said the elevated transit system would make downtown travel easier, thus attracting people to Detroit for shopping and entertainment. No credible observer today would suggest that the People Mover sparked an economic revival in Detroit, yet it continues to absorb millions of dollars in subsidies to cover its operations.

Despite the People Mover’s shortcomings, public officials and others kept relying on the latest big, flashy projects to revitalize a tired city: the Fox Theatre, Comerica Park, Ford Field and Campus Martius come to mind. All of these projects may be "diamonds," but without fundamental changes to Detroit’s economy they will remain diamonds in a very big rough.

Consider the way officials and the media described the impact that these big projects would have on the city:

Has the dazzle of major projects — both privately and publicly funded — blinded officials to hard economic facts? Despite all of the glitz and lofty rhetoric associated with these major projects, people continue to flee the city, presumably for better opportunity elsewhere.

It’s time for Detroit to take a different approach by addressing fundamental problems: crushing taxes and regulations, poor municipal services and a failing public school system. Only then can the Motor City hope to see the beginning of a true renaissance.

Michael D. LaFaive is director of the Morey Fiscal Policy Initiative with the Mackinac Center for Public Policy, a research and educational institute headquartered in Midland, Mich. This commentary was adapted from a December 2005 article, "Flashy Projects Have Not Helped Detroit." Permission to reprint in whole or in part is hereby granted, provided that the author and the Center are properly cited.