Is There a Statesman in the House? (Viewpoint on Public Issues) 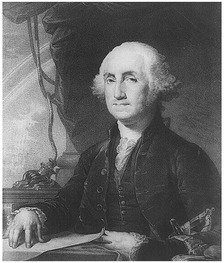 George Washington, in his farewell address, urged Americans to avoid "the accumulation of debt, … not ungenerously throwing upon posterity the burden which we ourselves ought to bear.”

All Americans lament the death and suffering along the Gulf Coast from the late-August assault of Hurricane Katrina. We grieve for those who have lost loved ones and property. We ponder the cost of recovery and what it will mean for deficit-ridden federal and local budgets. But the political spectacle of recent weeks spotlights yet another painful deficit the country must come to grips with — a shortage of statesmanship.

The pre-Hurricane Katrina story is a swamp of political malfeasance. Failure to properly prepare for such a contingency raises serious questions about well-paid public officials asleep at the switch.

Perhaps we should all take a moment to thank our great-grandchildren yet unborn. If we lack statesmen in this generation, we will still have our disaster relief, our pork and our politics — and they will pay for much of it.

In the storm’s aftermath, the statesmanship dearth is even more apparent. Many public officials have been occupied with finger-pointing and political posturing. And they are outbidding themselves with other people’s money either to cover for their earlier failures or to demonstrate their “compassion.” Will we find in this generation those exceptional leaders who will chart a responsible course through crises like this? Politicians are ubiquitous, but where are the statesmen?

Statesmen are a cut above politicians, who seek office for thrills or for power. Some politicians are better than others, but statesmen rise above mere politics, that meat grinder of principles. The clever politician knows how to deftly manipulate the levers of power for personal advantage, but the statesman’s allegiance is to loftier objectives.

Statesmen don’t seek public office for personal gain or attention. Like Washington, they take time out from a life of accomplishment to serve the general welfare. They stand for a principled vision, not for what they think citizens will fall for.

Because they seek the truth, statesmen are more likely to do what’s right than what may be politically popular at the moment. You know where they stand because they say what they mean and they mean what they say. They do not engage in class warfare, race-baiting or in other divisive or partisan tactics that pull people apart. They do not cynically buy votes with tax dollars. They take responsibility for their actions.

When it comes to managing public finances — especially relevant in light of massive appropriations for Katrina disaster relief — statesmen prioritize. They exhibit the courage to cut less important expenses to make way for more pressing ones.

George Washington, in his farewell address, urged his countrymen to avoid “the accumulation of debt, … not ungenerously throwing upon posterity the burden which we ourselves ought to bear.” His generation acquired the Revolutionary War debt, and his generation retired it. Over a century later, another statesman, Calvin Coolidge, vetoed popular programs to hold spending in check in order to pay off the debt his generation accumulated in World War I.

After World War II, statesmen emerged to echo Washington’s plea to bear our generation’s debt responsibly. President Dwight Eisenhower warned, “We — you and I, and our government — must avoid the impulse to live only for today, plundering, for our own ease and convenience, the precious resources of tomorrow.”

Statesmen would not saddle our children with debt from Hurricane Katrina. The private sector, after all, has produced a gusher of genuine compassion — quickly, efficiently and without handing future generations so much as a dime of the expense. Yet Congress and the White House are freely spending tens of billions of dollars for the Gulf Coast without lopping more than a pittance off even the most obvious pork.

Is it too much to ask Archer Daniels Midland to forgo its ethanol subsidies in the face of the disaster in the South? Is there a statesman in the House of Representatives who will rise in defense of suspending aid to the Rock and Roll Hall of Fame in Cleveland or the Country Music Hall of Fame in Nashville? Can Alaska’s congressional representatives be persuaded that not even bridges to nowhere are more important than keeping our monstrous debt from ballooning as help is sent to New Orleans?

Alas, if the performance to date is any indication, America’s political class has become a sorry lot — addicted to profligate spending, incapable of making sensible choices, oblivious to the trillions of dollars in debt to which it blithely adds billions more.

Perhaps we should all take a moment to thank our great-grandchildren yet unborn. If we lack statesmen in this generation, we will still have our disaster relief, our pork and our politics — and they will pay for much of it.

Lawrence W. Reed is president of the Mackinac Center for Public Policy, a research and educational institute headquartered in Midland, Mich. Dr. Burton W. Folsom Jr. is a Mackinac Center senior fellow in economic education. Permission to reprint in whole or in part is hereby granted, provided that the author and the Center are properly cited.