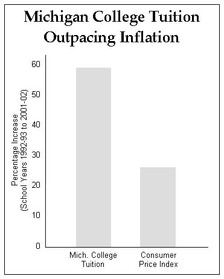 Tuition fees at four-year Michigan public universities have risen more than twice as fast as inflation from 1992 to 2002.

It has been a painful summer for Michigan’s public university students and their parents. The fifteen state-funded schools have announced tuition increases for the coming year, and universally they were far greater than the rate of inflation. The most prominent schools – the University of Michigan, Michigan State, and Wayne State – all announced tuition hikes of 12 percent or more, while increases at other schools ranged between 7 percent and 19 percent at a time when the national inflation rate was less than 3 percent.

Private for-profit schools like the University of Phoenix operate at dramatically lower cost per course, offering a product well-liked by students (enrollments are growing 20 percent annually), taught in comfortable but not opulent surroundings.

The schools blame a decline in state funding for the bulk of their problem. Yet news accounts indicate that the University of Michigan is using over 40 percent of the increased tuition revenue for “new spending initiatives.” Moreover, even in the prosperous 1980s and 1990s when university appropriations were generally rising, tuition increases typically were about twice the inflation rate. For example, in the nine years between the 1992-93 and 2001-02 school years, average tuition fees at four-year Michigan public universities rose 59 percent - compared with a 25 percent increase in the Consumer Price Index.

Why are tuition fees going up so much? The main reason is that the universities can get away with it, and have few incentives to cut costs. Third parties such as federal government student assistance programs and private scholarship donors pay most of the bills, making consumers relatively insensitive to the price of tuition. In the 10 years after 1994, federal financial assistance rose at a breathtaking annual rate of 11 percent. With the feds all but dropping dollars out of airplanes over college campuses, universities raised their tuition rates liberally, even in years with good state appropriation increases.

Most colleges and universities, including private ones, have virtually no incentives to reduce costs. There is no added compensation given to key employees if expenses are reduced. Indeed, the opposite is true: university administrators increase staffing levels to ease the burden on existing personnel, thereby lowering productivity. In 1976, there were three non-faculty professional workers per 100 students at the average American university; 25 years later, the number had doubled to six. Unless it can be demonstrated that there were enormous qualitative improvements in the education delivered (which, as a college professor of 40 years, I strongly doubt), labor productivity is actually falling in higher education, even after allowing for research. This contrasts with a continuous productivity rise in the private for-profit sector where stronger incentives exist to manage costs and be efficient.

This brings us to another reason tuition levels are increasing even more than health care prices – the increased compensation of university employees. While in the last two or three years raises have been modest at some cash-starved institutions, over the past generation university employee pay has increased even as the workload has fallen (because of added staffing). I estimate that the typical full professor today makes roughly 50 percent more in inflation-adjusted terms than in 1980. Average teaching loads are far lighter today than when I began teaching. At major research universities like the University of Michigan, the typical full professor teaches no more than five hours per week for 32 weeks a year. At the highest levels, university presidents, football coaches and truly superstar professors are earning salaries approaching the mid-six digits, or even more.

Some argue higher education is inherently labor-intensive, and costs inevitably will rise as pay increases to attract good people who would otherwise work elsewhere. While partly true, universities have not: used technology effectively to reduce costs; pared burgeoning administrative staffs; shucked low demand expensive doctoral programs; fully outsourced non-educational functions like housing and food operations; made better use of their capital (the typical classroom is idle 50 percent of the year). Private for-profit schools like the University of Phoenix operate at dramatically lower cost per course, offering a product well-liked by students (enrollments are growing 20 percent annually), taught in comfortable but not opulent surroundings.

Maybe the time has come for Michigan to emulate Colorado, and begin giving more higher education assistance to the students themselves in the form of scholarship vouchers, and less to the institutions, which by their behavior have demonstrated they are indifferent or even hostile to the cost containment measures needed to keep education affordable to all, rich and poor alike.

Richard Vedder is Distinguished Professor of Economics at Ohio University and a member of the Board of Scholars at the Mackinac Center for Public Policy, a research and educational institute headquartered in Midland, Mich. Permission to reprint in whole or in part is hereby granted, provided the author and his affiliation with the Mackinac Center are cited.