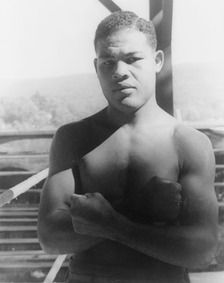 “This isn’t just one man against another or Joe Louis boxing Max Schmeling; it is the good old U.S.A. versus Germany.” Thus spoke Joe Louis, a black fighter from Detroit, before stopping Germany’s Schmeling in round one of the fight for the world heavyweight boxing title in 1938.

The significance of the Louis-Schmeling bout has received renewed attention following Schmeling’s death at 99 in February of this year. As Schmeling himself wrote in his memoirs, “Joe Louis … was suddenly the symbol of freedom and equal rights of all men and races against the Nazi threat” during World War II.

After World War II, Schmeling, at age 40, was past his prime. But boxing remained his best source of income, and fortunately, the liberated West German government allowed him to keep a substantial portion of the income he invested after boxing five mediocre postwar foes. The free-enterprise, low-tax policies of German leaders Konrad Adenauer and Ludwig Erhard had ultimately replaced Hitler’s “national socialism” and ignited the economic boom widely referred to later as the “German economic miracle.” Schmeling multiplied his earnings from boxing when he bought the license for the Coca-Cola franchise in West Germany.

Louis, by contrast, fought more effectively than Schmeling, but with very different results. Louis was still heavyweight champion and defended his title four times after the war. But the U.S. government, unlike the West German government after 1948, insisted on keeping most of what a wealthy fighter earned.

In 1935, when Louis was beginning to contend for the heavyweight championship, President Franklin Roosevelt spearheaded an increase in the top income tax level to 79 percent — a figure that rose to 90 percent during and after World War II. Louis’ boxing income, unlike Schmeling’s soft-drink earnings, was taxed punitively. The top income tax rate remained sky-high until President Kennedy cut it to 70 percent in the early 1960s. Ronald Reagan reduced it repeatedly during his presidency until it reached 28 percent in 1986.

Joe Louis donated money from two fight purses to the Navy Relief Fund and the Army Relief Fund. Roosevelt’s new tax laws were complicated, however, and Louis was not allowed to deduct those two purses, or other gifts he made, from his taxes.

In desperation, Louis came out of retirement in 1950 to fight Ezzard Charles, the new champion. “The reason,” Louis explained, was “taxes.” After the fight, which Louis lost, he called his mother, and she “begged me to stop now, but she couldn’t understand how much money I owed. … The government wanted their money and I had to try to get it to them.”

Louis fought Rocky Marciano the next year (and lost again). He earned $300,000 in the fight, but with a 90 percent marginal tax rate, he was able to chop off only a fraction of his half-million dollar debt — even after giving the IRS his entire purse. By the end of the 1950s, Louis’ debt, with interest compounding, had skyrocketed to over $1 million.

Louis maintained his dignity while he negotiated with the IRS. He refereed wrestling matches; he made guest appearances on quiz shows; and he served as a greeter at Caesar’s Palace in Las Vegas — anything to bring in money to keep the tax man at bay.

Even in destitution, Louis remained a symbol of black achievement and American resistance to Hitler. But the American tax code remained a symbol of the strangling of economic wealth and generosity. In 1981, when Joe Louis died, Max Schmeling came forward to help pay for the funeral from his Coca-Cola investment.

It may be true that nothing in life is as certain as death and taxes, but the death part, as Joe Louis and Max Schmeling might have agreed, is easier after low tax rates than after high ones.

Burton Folsom Jr. is Charles Kline professor of history and management at Hillsdale College in Michigan and is senior fellow in economic education at the Mackinac Center for Public Policy. Permission to reprint in whole or in part is hereby granted, provided that the author and the Center are properly cited.