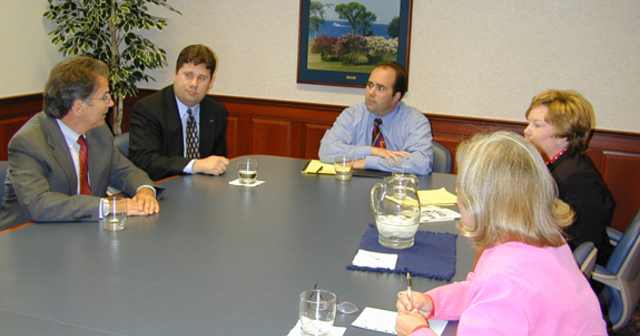 Shortly after his appointment as the state’s superintendent of public instruction in 2001, Thomas Watkins (left) met with the Mackinac Center to discuss philosophical and policy differences — and to find some common ground on which to build.
Education
Publications / Viewpoints

In a December report to the Michigan Board of Education, then-Superintendent of Public Instruction Thomas Watkins called for "boldness and candor" in addressing a "structural funding challenge" in the state’s public schools. A few weeks later, he exercised a bit of that boldness and candor in response to critics of charter schools, telling The Grand Rapids Press, "Let's take a look at traditional schools. Some of them will complain about losing 300 (students) to a charter, but you won't hear a peep out of them when 3,000 (dropouts) go to the streets."

If the Michigan Board of Education, Gov. Jennifer Granholm and the state Legislature hope to regain any credibility with the public, they must now show that they are serious about helping kids — and not just exiling people who offer straight talk about the system.

In January, the state board tabled a one-year renewal of Watkins’ contract. This decision came just one day after Board President Kathleen Straus had bristled when asked about rumors that Gov. Jennifer Granholm wanted Watkins to leave. Straus asserted, "The state board awarded the superintendent an A- grade on his last performance evaluation, and my colleagues and I have the utmost confidence in Tom."

Whether the board and the Granholm administration like it or not, Watkins’ subsequent departure sends the signal that it is virtual suicide to challenge the status quo or tolerate even weak forms of school choice, such as charter schools. Watkins’ December report may have been short on specific remedies, but it did show promise, making it plain that "additional revenue without unprecedented change" in the state’s education system was not likely to make a difference.

If the state Board of Education, Gov. Granholm and the state Legislature hope to regain any credibility with the public, they must now show that they are serious about helping kids — and not just exiling people who offer straight talk about the system. They should enact at least four reforms that wouldn’t require school choice, but would free education money for kids in the classroom without raising taxes:

The problems listed above are the "elephants in the room" that are too often ignored when education spending is discussed. If Watkins wasn’t permitted to even hint that there is more to fixing education than tired arguments amounting to nothing more than "spend more money" and "charters are evil," it’s hard to see why Michiganians should send another nickel to the public schools until state policymakers pass these commonsense reforms.