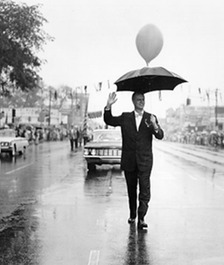 Michigan’s economy is struggling to recover from a recession that persisted longer than expected. Its government budget is in crisis, and its political leadership is divided between a Democratic governor and a Republican Legislature.

Early that year, the vestiges of an economic downturn had caused the state’s revenues to lag. Gov. G. Mennen “Soapy” Williams was nevertheless requesting a 13 percent increase in the government’s general expenditures, including additional spending for education, mental health and compensation for state employees. His own forecast projected a year-end deficit of up to $110 million — almost 30 percent of the prior year’s budget.

What’s the moral for state leaders today? The lasting and meaningful question is always, “Am I doing the right thing?”

The governor thus called for the imposition of a new corporate profits tax and a personal income tax. These proposals, however, were viewed as nonstarters in the state Senate, which was disproportionately composed of members from out-state Michigan, since the Senate was not then apportioned by population.

A core group of these Senate Republicans were frequently referred to as “The Neanderthals” in the media — though looking back today, their positions don’t seem all that reactionary. For instance, in describing their response to the governor’s tax proposals, a New York Times article noted: “Senate Republicans reacted violently to the income tax proposal. They suggested that the answer to Michigan’s revenue problem was a sales tax increase.”

Not exactly the Boston Tea Party.

At this point, only a series of short-term revenue measures had kept the state solvent, and the Legislature had reached the limit of its ability to find gimmicks and to increase various “nuisance” taxes. State leaders faced a fundamental choice: Either agree on new revenue sources, or reduce state activities to match revenues.

The governor and his executive officials devised an ingenious gambit to convince the Legislature to see things his way. The state attorney general had ruled that without a change in state law, the $170 million then sitting in the treasury could not be used for general fund purposes. Thus, on April 28, 1959, the governor announced that the state would be unable to meet the upcoming payroll for the legislative and judicial branches, affecting some 325 people. He also warned that all 27,000 state employees would miss their paycheck on May 7 unless the Legislature took action.

A stalemate ensued, but by May 11, the political pressure had become too great. All state employees had missed a paycheck, and on May 12, The New York Times reported that the governor “made a surprising switch” by agreeing to sign a bill that had already passed the state Senate to fund the state payroll by freeing previously restricted funds.

By the summer, the state Senate controlled the field, passing a multi-part tax package that included a 1 percent “use tax.” Even when the Michigan Supreme Court ruled that this use tax represented an unconstitutional hike in the sales tax, Senate Republicans dictated another tax program that included authorizing a statewide vote on a constitutional amendment to increase the sales tax from 3 percent to 4 percent. Michigan voters narrowly approved the sales tax hike the following year.

There weren’t any political winners in this fight. Soapy Williams, in his sixth term as Michigan governor, had destroyed his prospects for a vice presidential nomination, and he lost badly when he ran for the U.S. Senate in 1966. The “Neanderthals,” on the other hand, were eliminated as a political force after the U.S. Supreme Court ruled in 1962 that state legislatures had to be apportioned by population.

What’s the moral for state leaders today? Several lessons suggest themselves: that gamesmanship like the “Payless Payday” is often too clever by half; that revenue gimmicks can’t shield state leaders from hard choices; and that popularity is fleeting. The lasting and meaningful question for policy-makers is always, “Am I doing the right thing?”

In 1959, Michigan’s political elites decided to expand state government and raise taxes. Since then, Michigan has increased its sales tax to 6 percent. It has raised its sin taxes repeatedly. It has added a personal income tax and a Single Business Tax — modern equivalents of Gov. Williams’ proposals.

Will we once again follow the path of the Payless Payday politicians? Or have we reached the point where the “non-Neanderthal” response is to curb spending and even reduce taxes to improve Michigan’s economic climate?

Christopher F. Bachelder is director of communications for the Mackinac Center for Public Policy, a research and educational institute headquartered in Midland, Mich. Permission to reprint in whole or in part is hereby granted, provided that the author and the Center are properly cited.