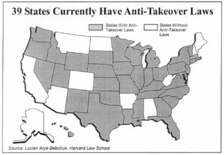 A case in point has been raging since late 2002, when two groups began battling for control of Taubman Centers, Inc. and its 30 shopping malls, including Twelve Oaks in Novi and Woodland in Grand Rapids. On one side are the Taubman family members, and on the other is Simon Properties Group, an Indiana-based shopping mall operator.

Shareholders, however, appeared to favor the Simon Property Group. The stock was trading at about $15 when Simon initiated its takeover attempt. Simon offered $20 per share, and 85 percent of the non-Taubman-group shareholders accepted the offer.

The Michigan Control Shares Act is similar to laws passed by many states in the 1980s. Under the Michigan statute, the acquirers’ shares can lose their voting rights unless a majority of “disinterested” shareholders (i.e., shareholders other than the acquiring group and the current officers of the company) vote to restore the lost voting rights. Thus, the statute has the potential to prevent an acquirer from gaining control of the company even if it owns a majority of the shares, by preventing the acquirer from voting those shares.

Defenders of anti-takeover laws point to the benefits of stable local ownership and the potential destructive effects of acquisitions aimed at raiding company assets and eliminating jobs in the state. But do anti-takeover laws confer any such benefits?

A 1995 paper in the Journal of Financial Economics found no evidence that state anti-takeover laws reduced the number of takeovers, and if anything may have actually increased the likelihood of takeovers. By contrast, the same study found that anti-takeover measures adopted by the companies themselves, such as “poison pills,” staggered director terms and multiple classes of voting stock, have been effective in deterring takeovers. A 2001 study published by the Virginia Law Review confirmed the lack of effectiveness of anti-takeover laws, and noted that state anti-takeover laws “received little if any support in the academic literature as there was no attempt by state legislatures to tailor them to any identifiable failure in the takeover process.”

The destructive effects of anti-takeover laws were demonstrated by the 1996-98 battle for Conrail, a Pennsylvania corporation. After Conrail’s management sought a friendly merger with the CSX railroad, rival Norfolk Southern railroad put in a higher bid for Conrail stock. Absent the Pennsylvania anti-takeover law, shareholders would have simply voted whether to accept the CSX offer, the Norfolk Southern offer, or neither, and the matter could have been resolved quickly. Instead, it took almost two years of costly litigation before the exhausted parties settled by dividing up Conrail between CSX and Norfolk Southern. In other words, the Conrail assets were divided up not so much due to a takeover, but rather to settle litigation arising from the anti-takeover statute.

Although anti-takeover laws may give the appearance that the state is “doing something” to deter takeovers of state-based corporations, the statutes often promote the very harms they are supposed to prevent, while imposing great costs and delays on the shareholders and other stakeholders in the corporations.

The Michigan Control Shares Act is an expensive placebo, and should be repealed. Without it, shareholders would still be perfectly free to enact their own private anti-takeover measures if they choose. While private anti-takeover measures have their critics, they at least have the virtue of being approved by shareholders, rather than being imposed by the state. And they may actually deter takeovers of state-based corporations.

(Theodore Bolema, Ph.D., J.D., is an attorney in the Finance and Law Department of Central Michigan University’s College of Business Administration, and an adjunct scholar with the Mackinac Center for Public Policy, a research and educational institute headquartered in Midland. More information on Michigan’s anti-takeover law is available at www.MichiganVotes.org. Permission to reprint in whole or in part is hereby granted, provided the author and his affiliations are cited.)