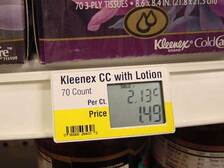 In 1976, Michigan heralded the passage of its Item Pricing Act as a boon for consumers, because it mandated "clear price information."  But with the passage of time and the development of new technologies, the law is becoming outdated.

Because of the 1976 law, Michigan is one of a few states that still require paper tags on most merchandise.  This is preventing our state's retailers from utilizing pricing innovations that employ modern computer systems.  The situation could be remedied by making it legal for Michigan retailers to substitute electronic price labeling (EPL) systems for paper price tags.

An EPL system shows the price for each item on the shelf where the item is displayed.  Prices can be changed instantaneously with a radio-operated device, connected to barcode-reading computer checkouts.  The 1976 Michigan law, because it requires individual price tags on items, makes it impossible for retailers to take advantage of this technology.

Allowing stores to substitute EPL systems for labor-intensive, hand-held "price guns" would save on labor costs, and a bill to accomplish just that has been introduced in the Legislature by Sen. Joanne Emmons, R-Big Rapids.  Those cost savings are likely to be greatest for grocery stores, given the large number of items they sell and the frequent need to match checkout prices with changing inventory costs.

The Michigan Consumer Federation has expressed reservations about EPL systems.  It fears that these systems might encourage grocers to take advantage of consumers with instant price changes of which they are unaware.  However, in states that allow new electronic labels, consumers express satisfaction.  In a survey conducted by Indiana University, two thirds of customers said that consumer service was better in stores using EPL systems.  The direct advantage to consumers is the elimination of price differences between the shelves and the checkout counter, making for greater consumer confidence in the integrity of store personnel.  Such pricing systems could thereby achieve the intent of Michigan's 1976 item pricing law-protecting consumers from being overcharged-by ensuring pricing integrity.

What if store managers could suddenly change prices between the time a consumer picked goods off the shelf and the time he arrived at the checkout counter?  Because of this possibility, EPL systems allow for a 2-hour delay in price changes (or overnight changes), thereby avoiding any unpleasant surprises.  Furthermore, EPL systems enable producers to respond very quickly to competitors' price changes, bringing cost savings to consumers.

With paper tags, stores must wait until they can lower the price of an item by at least four cents in order to afford the man-hours needed to make the change.  Electronic systems would enable stores to offer instant "blue light specials" for certain items or times of the day, for example, when there are few shoppers in the store.  This is the sort of off-peak pricing that vacationers are familiar with on airline tickets and even hotel rooms.  The advantage for buyers is lower prices in the "off season," as well as fewer long lines.

How large are the potential cost savings to consumers?  Over a period of one year, Knowlan's Super Markets in Minnesota spent 1,700 fewer hours making price changes with an EPL system, saving roughly $13,000.  The devices can typically pay for themselves in about a year.  Total savings will rapidly increase as the cost of EPL devices continues to fall (from $12 per unit in 1997 to a low of $5.50 today).  Because the grocery business is highly competitive, with very low profit margins, cost savings are passed on to consumers.

Some critics of changing the 1976 law may argue that EPL systems reduce available hours of work in Michigan.  But experience over the last four decades has confirmed that while new technology tends to eliminate some low-skilled jobs, overall it creates more employment.  In the case of grocery stores, for example, while bagging jobs have been largely eliminated, many new jobs in computer systems have been created for handling inventories, ordering, marketing, checkout and pricing.

Why should consumers in Michigan be denied savings enjoyed by consumers in other states, like New Jersey, and throughout Europe?  It is time to bring Michigan up to date with 21st century technologies and fix the 1976 item pricing law.

(Robin Klay, Ph.D. and Victor Claar, Ph.D. are economists at Hope College in Holland, Mich., and adjunct scholars with the Mackinac Center for Public Policy.   Permission to reprint in whole or in part is hereby granted, provided the authors and their affiliations are cited.)