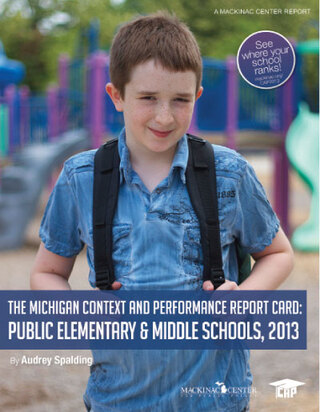 The carefully adjusted “CAP Scores” in this report card allow parents, educators and the general public to better compare performance among schools serving the various student populations in, say, Saginaw, Ann Arbor and Escanaba. CAP Scores do not penalize schools in lower-income areas.

This report card ranks 2,362 Michigan elementary and middle schools and relies on methodology developed by researchers at the University of Arkansas. CAP Scores are developed through a statistical regression of the schools’ average scores on the tests produced by the Michigan Educational Assessment Program and the percentage of the schools’ students at the grade level tested who were eligible for free lunch under the federal government’s National School Lunch Program. Eligibility for a federally subsidized free lunch is frequently used by education researchers to measure a student’s family income.

This report card incorporated MEAP subject tests administered in years 2009, 2010, 2011 and 2012 to students in grades three through eight. Schools that serve primarily students with special needs were excluded from this analysis.

The Overall CAP Scores were used to generate letter grades for each school using a standard bell curve. Ten percent of schools received an A; 20 percent received a B; 40 percent, a C; 20 percent, a D; and 10 percent, an F.

Burns Elementary-Middle School, formerly a Detroit City school and now under the oversight of the statewide Education Achievement Authority, had the lowest CAP Score in the state (73.27) and received an F. The next-lowest schools were EMAN Hamilton Academy (a Detroit charter school), Trix Elementary (EAA), Stewart Elementary (EAA) and Bay City Academy-YMCA Campus. Four of these five schools had data only for 2012 and appear to have opened recently.