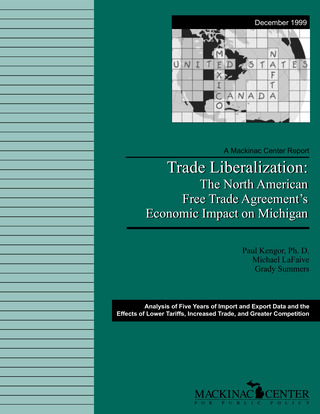 The North American Free Trade Agreement (NAFTA) is six years old. Has it benefited Michigan's economy? Or has it destroyed jobs and hampered prosperity, as predicted by many who participated in the national debate that raged for two years prior to its ratification? The verdict is in, and the available data clearly show that free trade is proving to be a significant boon to Michigan businesses and citizens. This study analyzes five years of import and export figures to show that the tariff cuts enacted by NAFTA have led to significantly increased Michigan exports to Canada and Mexico. The study concludes that while some businesses may have been hurt by NAFTA, on balance, removing government barriers to trade has been a positive step toward increasing the prosperity and standards of living for Michigan citizens-and citizens throughout America, Canada, and Mexico.

Lifting trade restrictions and lowering tariffs have been positive steps toward increasing the prosperity and standards of living for Michigan citizens-and citizens throughout America, Canada, and Mexico.