More than 100 bids, but house torn down

More than 120 bids were made on the former home of the Michigan native and entertainer. One fan wanted to turn it into a museum, according to an article on MLive.

Unfortunately, the Michigan Land Bank failed to sell the property and failed to protect it. On Nov. 7, the home Eminem lived in during his teenage years was damaged in a fire.

Even after that, people still wanted to buy the property. But the land bank halted bidding, saying that, "the condition of the property post-fire presents a safety hazard that the Land Bank is responsible for removing."

The notion that would-be buyers might be willing to restore the property apparently wasn't a consideration.

The land bank's failure to sell Eminem's former home is a failure of marketing. The agency acquired the property in late 2012, but didn't publicize its significance. MLive reported that the 120 or so bids the land bank received after news coverage was a volume so high that the land bank's website crashed.

Unfortunately, a close look at the Michigan Land Bank would likely reveal that this is par for the course. Some of the properties the land bank has featured as success stories are now vacant — just a few years later.

One such example, is 15743 Burgess (photo below). The property was featured prominently in one of Michigan Land Bank's biennial reports to the governor as a success story, and was new construction. 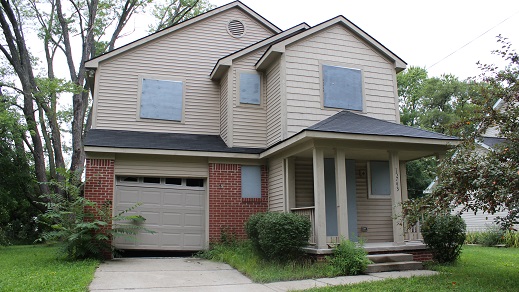 The botched handling of Eminem's former home, as well as 15743 Burgess and recent occurences at other land banks suggest it's time to take a close look at reforming Michigan land banks.

These entities have received hundreds of millions of dollars in taxpayer money, and have little to show for it.