The textbook is often informative but is sometimes marred by distortions and biases. Students reading this text need to do regular outside reading to get a balanced view of Michigan history.

Two fourth-grade texts are widely used in Michigan. The first is Discover Michigan by David McConnell, who also wrote the more advanced text Forging the Peninsulas.50 McConnell’s fourth-grade text is much shorter and simpler in style.

His organization is probably very good for fourth graders. First, he has a clear chronological narrative that hits the main themes of Michigan history—the Indians, the French settlement and the fur trade, the British, the American triumph, Michigan statehood, and industrial development. Second, he sprinkles biographical sketches throughout the text. For example, Marquette, Cadillac, Pontiac, Tecumseh, Joe Louis, Henry Ford, and Walter Reuther all get separate biographies. For children (and even adults) telling stories about people is a good teaching technique. It can also be a way of reinforcing values and good character. 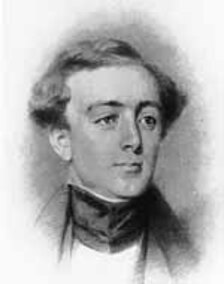 Governor Stevens T. Mason, who helped sponsor the state-railroad fiasco, was practically chased out of the state. McConnell, however, without supporting evidence, says Mason "led the state well."
More images …

McConnell’s historical coverage has its strong and weak points. The early economic history of Michigan is well done. McConnell shows the importance of the fur trade in French-Indian and British-Indian relationships. The later history, the rise of industry, is also done capably. The students read about lumber, copper, and iron ore in the 1800s and autos in the 1900s. Most of the 20th-century section is weak. McConnell has almost no coverage of Michigan after World War II. The last four chapters of the fourteen chapter text are not historical. They discuss such things as farming, traveling, and living in Michigan today.

Texts for fourth graders, of course, must be short and easy to read. Authors can’t go deeply into complicated material. Even so, McConnell could have done something to show students the difference between economic development through private enterprise and economic development through government or government subsidies. McConnell does not mention the government-operated fur company and its financial problems. He also omits the story of the state-built railroads and canals, and how and why the legislature privatized Michigan’s railroads. Governor Stevens T. Mason, who helped sponsor the state-railroad fiasco, was practically chased out of the state. McConnell, however, without supporting evidence, says Mason "led the state well." 51

McConnell needs a balanced treatment of unions in his text. He cites no negative effects of unions, only positive ones. "The workers wanted a say in how much they were paid. They wanted to have a say if people were fired. Today, most people feel unions are good. They keep the bosses from being too powerful. Unions help the workers have better jobs and more pay." The problems with these arguments have been described earlier. Therefore, it might be best just to analyze this statement McConnell later makes "Michigan now has some of the most powerful unions in the world. The auto workers have some of the highest pay in industry anywhere." 52 For balance, McConnell needs to go one step further. High-priced labor means higher-priced cars. Higher-priced cars mean high costs for cars to all Americans, whether they be rich or poor, in a union or not. In this sense, the auto unions have caused problems for most Americans, not to mention the opportunities that America’s high-priced labor—and management costs, too—have given to Japanese car makers.

McConnell’s lack of balance on unions mars the appeal of his text. Readers, even fourth graders, can see the faulty logic. Some of them will ask, "If unions can get us more money, why would the economy ever get in trouble? If we just pay unions and workers more money, won’t everyone be happy?" Students find no answers to these questions in the text.

Along the same lines, McConnell needs to explain to students the historical rise of big government, what this has meant in higher taxes, and the historical problem of government in stifling economic development in Michigan. Fourth graders, for example, already know they pay a sales tax (6 percent) on things they buy in a store. When and why did Michigan get a sales tax? Where does that money go? Schools are not free. Where does the money come from, and why have per-pupil costs risen so sharply in the last 30 years? Students would find it interesting to learn that every time their parents fill the family car with gas they are paying about 40 cents a gallon in state and federal taxes. On this subject, students might wonder why Michigan sends more gas revenue to Washington than it gets back in highways.53 These are major political issues today, and they have roots deep in Michigan’s past. McConnell’s text would be better if he talked about some of these issues.