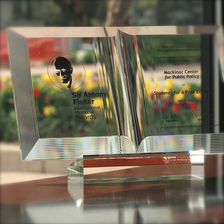 At its annual Liberty Forum, the Atlas Economic Research Foundation announced the winners of the 2008 Sir Antony Fisher International Memorial Awards, which honor think tank publications that have made the greatest contributions to the public understanding of the free society.

What follows is taken from the Atlas Foundation's news release announcing the award.

Mackinac's "Students for a Free Economy" multimedia project has taken a thoroughly modern approach to the task of enticing Michigan college students to learn about free market ideas. The program recognizes that America's youth have long passed the point of excitement over most "new media"; after all, they've grown up with CDs and DVDs, and they've watched these media get left in the dust by MP3s and YouTube.

Projects in the SFE portfolio have included: a[n] Economic Freedom and Human Prosperity booklet; the Vive La Liberte blog; postcard invitations to join SFE; a line of original T-Shirts; "I Party with Economic Models" frisbees; "Because Freedom Needs a Young Voice" stickers; SFE business cards; as well as SFE writing contests that have generated dozens of free-market articles in campus newspapers across the state.

SFE has hosted more than 25 events last summer, including Competition Makes it Better, where they took 20 students to a baseball game to celebrate the late Milton Friedman's birthday and the value of competition; two colloquia; booths with iPod raffles; free market book fairs. A Fisher Award judge remarked, "The Mackinac Center's project addresses an absolutely crucial group of people -- young students. In the future, they will possibly become multipliers as they advance to top careers. In that sense, with regard to the focus group, the project does effectively advance public understanding of the principles of a free society. In the nicely designed booklet, e.g., the project provides brief, reliable summaries of the core principles and values of a free society. All the media that the Center uses convey the impression that these principles are of top relevance."

Mackinac receives $2,000 as the winner of the Special Innovative Projects Award.

The Atlas Economic Research Foundation has been supporting independent think tanks that support the free society for more than 27 years. Atlas currently works with more than 250 think tanks in 80 countries. More than half of these organizations were assisted in their formative years by Atlas through financial support or advisory services.

The Sir Antony Fisher International Memorial Awards were named in honor of Atlas' late founder, who believed independent think tanks can play a crucial role in improving the public understanding of freedom.

Congratulations to Isaac Morehouse and his team for working for the cause of liberty on Michigan's college campuses.