Proponents of higher taxes, including municipal and university officials, are campaigning to wrest more money from Michigan citizens in order to grow government yet again. According to the "Michigan Fiscal Responsibility Project," taxpayers can afford to send more of their earnings to Lansing because of the supposed recent growth in state personal income. But hollow rhetoric and data manipulation cannot change the fact that Michigan families are earning less and laboring under a heavier tax burden than most other Americans.

A report released earlier this month under the MFRP banner purports to show that personal income in Michigan has increased significantly since 2000. Accordingly, the MFRP contends, government revenues and spending ought to increase — the implication being that government deserves a cut of every pay raise.

It’s hardly surprising that the Michigan Municipal League, the Presidents Council, State Universities of Michigan and the Michigan Health & Hospital Association are lobbying for higher taxes — and using tax dollars to do it. Their power and influence is a function, in part, of the amount of tax dollars they control. It is troubling, however, that the data presented under their names is misleading and inaccurate.

The thesis of the MFRP report is based on aggregate personal income in Michigan. But aggregate figures do not account for changes in population and therefore distort income trends. A more appropriate measure of earnings is per-capita personal income, which accounts for changes in population and thus better reflects the actual earning power of individual Michigan citizens. Indeed, from 2001 through 2006, Michigan’s per-capita personal income increased by 12.8 percent, while inflation increased by 13.8 percent, which represents an inflation-based decline in earnings — not the increase claimed by the MFRP. 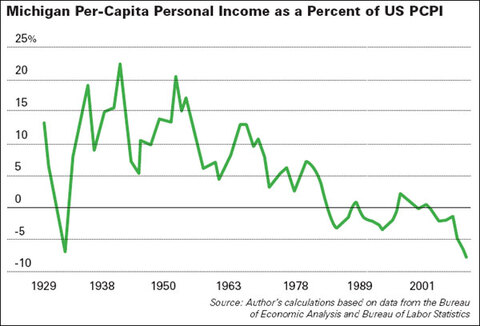 The income data reported by MFRP also is incomplete, thus rendering its conclusions speculative at best. Although unacknowledged in the report, actual income data for 2007 have not been released, and the state government projections employed in the report are unreliable — as the public relations firm that prepared it is aware. For example, state government estimated personal income growth at 4.5 percent in January 2004; the actual figure turned out to be just 1.7 percent — meaning the original estimate exceeded the correct figure by 165 percent.

The use of actual income data from the U.S. Bureau of Economic Analysis undercuts the MFRP’s claim that higher incomes justify higher taxes. Based on actual figures from 2001 through 2006 (the last year of available data) real aggregate personal income in Michigan increased by a microscopic 0.03 percent — essentially stagnant.

The MFRP also selected a date range that would best support its claims. But as the chart below illustrates, real per-capita personal income has both risen and fallen in recent years. 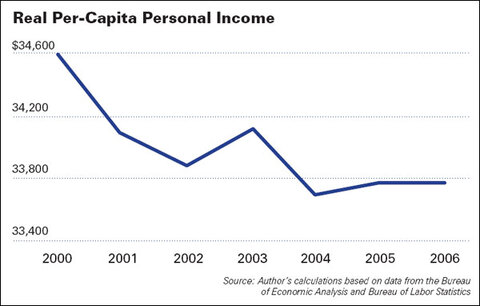 A broader historical context is also useful in judging income trends in the state. The following charts contain data for both real income and real per-capita personal income dating back to 1950. The charts show that by either measure of income, Michiganians' earnings have recently been inert after years of net growth. 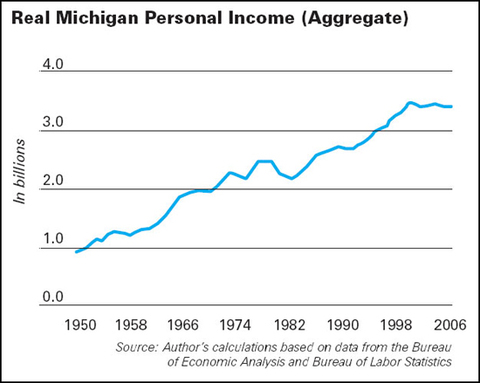 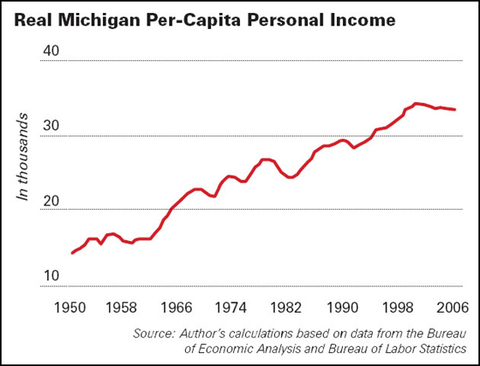 The MFRP also errs in its calculation of state tax burden by claiming that state taxes consumed 9.49 percent of aggregate personal income in FY 2000-2001. The actual figure, according to the state Senate Fiscal Agency, was 8.6 percent. This fact undercuts the claim that the state is starved for revenue.

State government did take 9.49 percent of personal income in FY 1999-2000 — the highest level permitted by the Michigan Constitution. But in that year, tax collections nationwide also were peaking due in large part to “New Economy” growth, full employment and sizable capital gains from skyrocketing stock valuations. Conditions today are far different, of course, with Michigan beset by unemployment and a housing market in steep decline.

The notion that the state should take today the same tax bite it took at the peak of exceptional economic growth is just plain reckless. Raising taxes again — just months after a $1.4 billion hike last November — would only exacerbate Michigan’s economic woes.

Even before the latest tax hike, Michigan had the 14th largest combined state and local tax burden in the nation, according to the Washington, D.C.-based Tax Foundation. This represents a dramatic worsening in relative tax burden since 2000, when the state was 26th, and in 2001, when the state was 30th.[1] (Note: On Aug. 7, 2008, the Washington, D.C.-based Tax Foundation released its newest State-Local Tax Burden Ranking of the 50 states. This report included a change in the methodology used to compute and rank tax burdens which led to a significant drop in the position Michigan held in Tax Foundation rankings — from 14th to 27th among the 50 states.) Moreover, the MFRP report addresses only state taxes, ignoring the sizable levies imposed at the local level.

That oversight doesn’t prevent the MFRP from claiming that the current tax rate jeopardizes public safety by forcing local governments to lay off police and firefighters. But many local governments are spending tax dollars on golf courses, skating rinks and other nonessential services that are best provided by the private sector. They also have foregone the budget savings that could accrue from privatization, while increasing unfunded liabilities through unsustainable employee pension and health care commitments.

The MFRP report singles out universities as hard hit by state budget cuts and claims that larger appropriations would mitigate tuition hikes. This assumption is not supported by the facts. For decades, universities have boosted tuition and fees at rates far in excess of inflation, even when annual appropriations increased. For example, total expenditures by Michigan’s 15 public universities increased from about $2.4 billion in 1985 to $7.6 billion in 2002,[2] according to the MFRP’s own Presidents Council, State Universities of Michigan. During the same period, average tuition and fees rose by 73 percent more than the rate of inflation. Recent data suggest that a similar trend persists.[3]

Despite its many flaws, the MFRP report has been treated as credible by some media and policymakers. But skepticism is in order. The Project is a special interest group clamoring for more tax revenue — some $5 billion more. While municipal officials and university presidents undoubtedly would benefit from such a windfall, Michigan families can hardly afford a heavier tax burden.

[3] According to the National Center for Education Statistics, state appropriations, tuition and fees rolling in to Michigan public universities had still increased 24.7 percent from 2000 through 2005 (the last year in this series), in contrast to a 13.4 percent increase in the Consumer Price Index. This finding is reinforced by data cited in a 2007 study by Mackinac Center Adjunct Scholar Richard Vedder, a professor at Ohio University, and Matthew Denhart, a research assistant with the Center for College Affordability & Productivity (see “Michigan Higher Education: Facts and Fiction,” www.mackinac.org/8647).