(Note: The following essay was updated Jan. 4, 2008, to reflect new migration data from United Van Lines, LLC the largest household moving company in the nation. According to UVL, a record 67.8 percent of all their Michigan client traffic was outbound. The previous record was set in 1981 when the state unemployment rate averaged 12.5 percent.)

Michigan residents continue to flee the Great Lake State and are doing so at a record rate, according to one vital measure. The implications of this diaspora — or dispersion — of our residents across America are staggering. 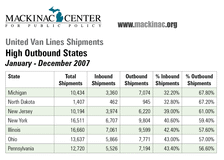 People are the basis of all economic development. It is people who create, produce, employ, work and generate wealth. Nothing is more important to Michigan than stanching the flow of its people to "opportunity states" by making itself relatively more attractive to people and job providers alike.

In recent years, Michigan policymakers have done little to slow this outbound migration. Indeed, both political parties in Lansing have done the opposite by catering to special interests that benefit from higher taxes or advocate for the imposition of additional regulatory burdens. Such policies raise the relative cost of living and working in Michigan. Lansing’s most recent policy mistake — a nearly $1.4 billion tax hike — has not gone unnoticed by political and business leaders alike.

Since the Legislature and governor approved the tax hike, the state of Indiana erected billboards near the border encouraging Michiganians to, "Come on IN for Lower Taxes, Business and Housing Costs." (They’ve also taunted Illinois, another neighbor on a tax-hike spree.) Indiana is also running radio ads with the same message on Lansing’s WJIM (listen to the advertisement here). As an aside, none of this Hoosier activity is funded with tax dollars.

The highly respected Tax Foundation, whose data has been cited prominently by both the Mackinac Center and Gov. Jennifer Granholm’s administration, ranks Indiana at 25 among the 50 states in overall tax burden. Before the recent tax hikes, Michigan was ranked as having the 14th highest tax burden, but the increased levies have likely moved us into the 12th worst slot. (Note: On Aug. 7, 2008, the Washington, D.C.-based Tax Foundation released its newest State-Local Tax Burden Ranking of the 50 states. This report included a change in the methodology used to compute and rank tax burdens which led to a significant drop in the position Michigan held in Tax Foundation rankings — from 14th to 27th among the 50 states.)

Of course, while taxes do impact a state’s economic well being, they aren’t the only variable that matters. Economists Stephen Moore and Arthur Laffer recently completed a study for the American Legislative Exchange Council titled, "Rich States, Poor States: ALEC-Laffer Competitiveness Index." It contains competitiveness indices ranking the states on 16 variables, including taxes, regulation and right-to-work status, among others.

Describing the findings in a Dec. 10 Wall Street Journal column, Moore and Laffer report that over the past 10 years, "… the 10 states with the highest taxes and spending, and the most intrusive regulations, have half the population and job growth, and one-third slower growth in incomes, than the 10 most economically free states."

The authors add that, of the 16 variables examined, the two that stood out were taxation and right-to-work laws. It’s probably not a coincidence that right-to-work states also have faster population growth. For example, from summer 2005 to summer 2006, nine of the top 10 states in estimated population growth were also right-to-work states. A number of economic studies demonstrate that the absence of a right-to-work law acts as a deterrent to business investment. It is no surprise that states that welcome employers also turn out to be places that attract employees.

Among those top 10 states is Florida, which not only has a lower state and local tax burden than Michigan, but also has no individual income tax and a right-to-work law. This may help explain why it is the number one destination state of Michigan’s outbound migrants. According to Internal Revenue Service data, 14 percent of all 2004 Michigan moves were to the Sunshine State, double that of the second and third choices of Ohio and Illinois. It is worth pointing out that Florida is such a dominant draw for Michigan residents that there is probably more than retirement-inspired migration occurring here.

Saginaw-based Stevens Worldwide Van Lines reports numbers similar to those posted by UVL. Morrie Stevens, chairman and CEO of the 102-year-old company, told the Mackinac Center that in calendar year 2007 his company’s shipments have been running 2-1 in favor of leaving Michigan. He believes the outbound traffic is "a function of the weak economy as displaced workers and young people leave to find better opportunities elsewhere."

Today Michigan has the worst unemployment rate in the nation at 7.4 percent, but even that figure is masked by the state’s ability to export its unemployed. Over the past four years the nation has enjoyed significant economic growth. Consider just one state: North Carolina, with an unemployment rate of just 4.8 percent, is ranked number one by UVL for its highest inbound traffic rate at 62.1 percent. From 2002 through 2006, North Carolina enjoyed annual average real state Gross Domestic Product growth of 3.4 percent. By contrast, Michigan’s real annual average rate of growth was 0.1 percent. State GDP is one of the primary metrics used by economists to measure a state’s economic health.

Some may be tempted to dismiss UVL data as not being a leading indicator for emigration patterns because the people hiring the moving company may not be representative of the population at large. But last year the Mackinac Center did several statistical analyses of UVL data and census data and found the two to be very highly correlated.[1]

The impact of Michigan’s diaspora may be starting to sink in with lawmakers. On Jan. 11, State Demographer Kenneth Darga is scheduled to speak at the state’s annual Consensus Revenue Estimating Conference, which prepares the revenue projections that lawmakers use in formulating the next state budget. This is the first time a demographer has been invited to testify at this conference since at least 1980. (It may be the first time ever.)

Adding to the pain, as more people leave the state, housing prices may drop further, and with them assessments and property tax revenues, reducing revenue to schools and local governments. Michigan is already dead last in home price appreciation (-3.7 percent), according to the Office of Federal Housing Enterprise Oversight, and sixth in property foreclosures, according to RealtyTrac.

Nationwide, housing prices fell 6.7 percent from October 2006 through October 2007, a record drop according to the Standard & Poor’s/Case-Schiller Home Price Indices. The 10-city price index has been published since 1987. Detroit, which is included in the index, saw one of the biggest declines. A further nationwide decline in housing prices was predicted through early 2009 by Moody’s Economy.com. It’s easy to imagine Michigan pacing that decline, and further drops in home values may mean less money for every unit of government, including schools. Such trends will not be reversed unless people discover sound economic reasons to stay in or move to the Great Lakes State.

Remember, too, that much of this bad economic news was recorded before state legislators voted to take another $1.4 billion from the private sector with a massive tax hike. The new Michigan Business Tax was effectively raised before it even took effect. Michigan didn’t really need to convey additional messages that it was hostile to commerce — but it did so anyway.

It seems inconceivable that any serious person can believe Michigan’s economic performance and outbound migration rate will improve as a result of Lansing’s latest reach into taxpayer pockets. Rather, the tax hikes have all the signs of being motivated by a desire to protect the big government status quo in Lansing.

Let there be no mistake: Michigan’s current economic troubles have no precedent. Customarily, the state has done better than other states when the national economy is growing and relatively worse when it contracts. This time it’s different: Michigan’s relative economic performance as measured by its rank among the states in per-capita state Gross Domestic Product has plummeted — during a period of economic growth nationally.

The numbers drive this home: State GDP is simply the value of all the goods and services produced within our geographical borders. In 1999 we ranked 16th in the nation in nominal state GDP per capita. By 2006 our rank had fallen to 39th place, and it is likely to drop further.

So, how can the Michigan malaise be reversed? For starters, we recommend that the state adopt many of the hundreds of policies the Mackinac Center has already proposed. Below are four categories on which the Center has written exhaustively; each contains links to other Mackinac Center papers that better detail such ideas.

1. Tax Reform. Repeal the new Michigan Business Tax (which replaced the Single Business Tax) and replace it with nothing

2. Budget Reform. Adopt the more than $2 billion in recommended spending reductions made by the Mackinac Center in major budget studies, commentaries, and special Policy Briefs.

3. Regulatory Reform. Reverse the rapid growth of business regulations, especially in the areas of environmental permitting and property rights infringements.

State policymakers may also wish to reference the Mackinac Center’s 2002 paper, "Keeping Michigan on Track: A Blueprint for a Freer, More Prosperous State," which details 77 different ideas for making Michigan a better place to live, work and invest.

Economic history over the centuries and from around the world makes it clear that only these types of policies will restore Michigan’s status as a magnet for people and commerce. History also shows what happens to places that fail to attract these.

Michael D. LaFaive is director of the Morey Fiscal Policy Initiative at the Mackinac Center for Public Policy, a research and educational institute headquartered in Midland, Mich. Michael Hicks, PhD, is an adjunct scholar with the Center and director of the bureau of business research for the Miller College of Business at Ball State University in Indiana. He is also an associate professor of economics with the university.

Permission to reprint in whole or in part is hereby granted, provided that the author and the Center are properly cited.


[1] In statistics, achieving an "R-square" value of 1 indicates perfect correlation. One of our analyses produced a value as high as .935, which suggests UVL data is an exceptional leading migration indicator.