The Basis for Hold-Harmless Millages

Yet the district's foundation allowance for fiscal 2007 is $10,645. This $2,437 per-general-pupil difference results from Proposal A, which allows Lamphere to levy a hold-harmless millage to help make up the difference (the specific statutory language was quoted earlier under "'Hold-Harmless' Millage", under "Local Property Taxes by Type").

Annual Adjustments to the Foundation Allowance

The '20j Supplement' for Hold-Harmless Districts

In addition to hold-harmless millage revenue, hold-harmless districts are able to maintain their level of spending in part through a state payment calculated under section 20j[cxii] of the State School Aid Act. This supplment is often referred to as a "hold-harmless payment."

Case 1. The first calculation is applied to districts whose per-general-pupil local operating revenue is less than or equal to the sum of the dollar adjustment difference and the district's current foundation allowance. If a district fits this criterion and does not fit the criteria for Case 2 below, its 20j supplement is equal to the dollar adjustment difference multiplied by the number of general education FTE students.

Case 3. The third 20j calculation involves districts whose local operating revenue per general-education pupil is greater than the sum of the district's foundation allowance and the district's dollar adjustment difference. Districts that meet this criterion receive no payment under section 20j.

The adjustments discussed below appear in section 20 of the State School Aid Act (MCL § 388.1620) and are being made to the foundation allowances of conventional local public school districts in fiscal 2007. Also discussed is a section 20 adjustment — the former "section 32e" supplement — that remains relevant because it is used when calculating other education grants to certain school districts.[cxvii]

Former 'Section 32e' Money. Subsection 19 of section 20 of the State School Aid Act requires that a supplement be paid to districts that once received state education money under section 32e.[cxviii] The amount of money that was once disbursed under section 32e is still used in some calculations of certain other state payments made to conventional local school districts.[cxix]

The districts that received funding under section 32e had schools that met the following criteria in 2002:[169]

The districts may or may not meet these conditions any longer, but the current law stipulates that the only test for receiving an adjustment under subsection 19 of section 20 is whether the district received funding under section 32e in 2002. The per-pupil adjustment amount is fixed at its 2002 level, but is based on the total state aid membership for the current fiscal year.[cxx] The additional money a district receives under this section must be used for one of three possible objectives:

In the Wakefield-Marenisco School District, for example, 13.83 general education FTE students in January 2007 came from three other districts under sections 105 and 105c. As Graphic 18 shows, the district’s revenue from these nonresident students was $97,985.55. That amount is based on the resident districts’ foundation allowances, since the resident districts’ allowances are lower than Wakefield-Marenisco’s allowance of $7,645.

On Wakefield-Marenisco’s state aid financial status report, however, the 20(5) adjustment is reported as -$7,744.80. In effect, the state aid financial status report assumes that the district receives its own foundation allowance for all of the students the district enrolls, but then reduces this calculation by $7,744.80 to acknowledge that the “schools-of-choice” students’ foundation allowances are subject to the adjustments required in sections 105 and 105c.[177] 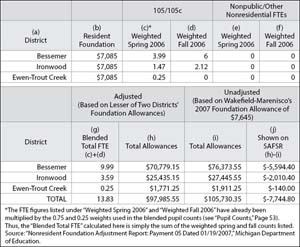 Nonresident Student Adjustment Not Under Sections 105 and 105c. In some intermediate school districts, conventional school districts enter into collaborative agreements regarding interdistrict pupil transfers without using sections 105 and 105c. In such cases, the foundation allowance that the enrolling district receives is that of the district to which the student was assigned. Consider, for instance, the Mona Shores School District. Based on January 2007 data, Mona Shores is receiving money for 378.31 full-time-equivalent students who were originally assigned to various other districts, but who attend Mona Shores under a collaborative agreement like that described above. This movement of students necessitates a financial modification known as a “nonresident student adjustment.”

Graphic 19 shows these students’ originally assigned districts at the far left. Because these students are not entering Mona Shores under the section 105 and 105c school choice options, Mona Shores receives the foundation allowance of the resident district, even though all the districts listed have higher allowances than Mona Shores does. The total foundation allowance assigned by the state to the students who attended Mona Shores under the nonresidential student arrangement in fiscal 2007 would be $2,801,912.29 based on January 2007 figures. This number is the “Adjusted” figure in Graphic 19, meaning that it is based on the resident district’s foundation allowance, not on Mona Shores’ own allowance, which is the basis for the “Unadjusted” figures at the far right. For comparison, the total allowances that Mona Shores would have received had it been paid an unadjusted amount — i.e., based on its own foundation allowance for 2007, $7,085 — would have been $2,680,326.35. That is $121,585.94 less than the adjusted amount, and this $121,585.94 figure appears on Mona Shores’ January 2007 state aid financial status report as the “20(5) Adjust.” (Note that the adjustment for nonresident students who transfer under sections 105 and 105c is also called a “20(5)” adjustment, since nonresident student calculations for both 105/105c and non-105/105c transfers are described in that subsection.) 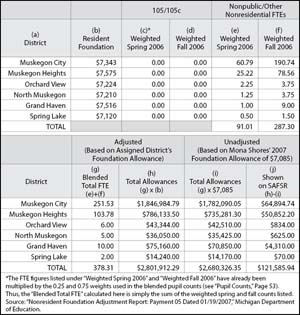 [cxi] The Lamphere district did, in fact, levy its maximum possible nonhomestead property tax of 18 mills in fiscal 2007.

[cxiv] We say “approximately” here because the state’s calculations of the district’s foundation allowance adjustment since 1999 appear to include fractions of a dollar that used to be part of Novi’s (and many other districts’) district foundation allowance in 1995 (see MCL § 388.1620(3)(c)).

[cxxi] The No Child Left Behind Act is the federal law governing the distribution of much of the federal education revenue from the U.S. Department of Education to state governments. The act is discussed in more detail in “Distribution of Money from Federal Sources,” Page 90. 8583

[cxxii] A third type of student transfer involves a student’s attendance at classes offered by an eligible postsecondary institution during his or her secondary schooling. Such a transfer may be effected under the Postsecondary Enrollment Options Act (MCL § 388.511 through MCL § 388.524). This transfer technically does not involve a state “adjustment” to the district’s foundation allowance, but rather requires the student’s district to pay the institution the lesser of the cost of the student’s education or a prorated portion of the student’s foundation allowance (MCL §§ 388.1621b(2), 388.1621b(3)).

[cxxiv] A brief note is in order about the pupil counts in Graphic 19. The Michigan Department of Education uses FTE student count data from the state government’s Center for Educational Performance and Information, but the CEPI’s FTE counts differ from the numbers listed in the graphic because the blend percentages have not been applied to CEPI’s numbers. For instance, CEPI indicates that the number of FTE general education students who reside in Muskegon Heights but transferred to the Mona Shores district was 104.75 in fall 2007. If we multiply 104.75 by 0.75, we get 78.5625, which is the (unrounded) number listed in column (f) of the “Muskegon Heights” row of Graphic 19. Similarly, CEPI lists the Muskegon Heights FTE count for the same categories in spring 2006 as 100.88. If we multiply this figure by 0.25, we get 25.22, which is the number listed in column (e) of the “Muskegon Heights” row.