In fiscal 2006, two taxes were the top sources of revenue to the federal government: the federal individual income tax, which raised $1.85 trillion, and the corporate income tax, which raised $350 billion.[147] Total federal government revenue, including borrowing, was approximately $2.9 trillion. This revenue is largely commingled, and a portion of this money is spent on education.

In fiscal 2006, the U.S. Department of Education received approximately $36.5 billion in federal revenues for elementary and secondary education programs.[148] Of this amount, according to the federal government, the department spent $1,107,454,389 (about $1.11 billion) in Michigan in fiscal 2006.[149] According to the state Department of Education, however, the federal government provided $1,360,741,678 to Michigan state government in fiscal 2006.[150] This $1.3 billion constituted about 10.81 percent of the state school aid fund.[151] Much of that amount — $667,588,309 — financed programs that are part of the No Child Left Behind Act of 2001. All federal revenues for Michigan education are placed in the state school aid fund.

Graphic 10 illustrates the percentage distribution of major primary and secondary education funding categories. Graphic 11 breaks out funding for NCLB by grants that made up at least 1 percent of the total federal revenue from the U.S. Department of Education appropriated to the state of Michigan. 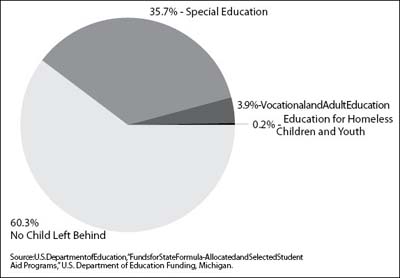 Graphic 11: Federal No Child Left Behind Funding for Michigan by Percentage, Fiscal 2006 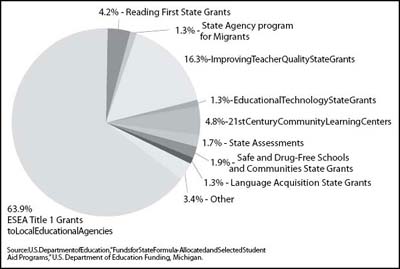