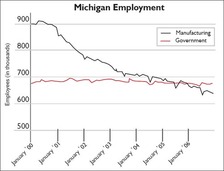 Throughout the 20th century, Michigan has been associated with manufacturing. Look up Michigan in an encyclopedia or school textbook and you will likely read about industrial giants, assembly lines, unions and mass production. But an employment shift in 2006 may signal that Michigan in the 21st century will be known as the government state.

The recent announcement by Pfizer that it would shed 2,400 jobs by 2008 has dominated headlines across the state — as have employment losses elsewhere in Michigan. According to the U.S. Bureau of Labor Statistics, Michigan currently has the second-highest unemployment rate in the nation, at 7.1 percent.

Meanwhile, according to the BLS, total government employment in Michigan, which includes federal, state, local, higher education, and public primary and secondary schools, is up 3.9 percent over the last decade. Non-farm employment is down 1.7 percent during the same period (both figures are seasonally adjusted).

More importantly, Michigan has crossed an employment Rubicon of sorts. The BLS shows that 2006 was the first full year that total government employment in Michigan exceeded the number of manufacturing employees (this BLS data set goes back to 1956 and also is seasonally adjusted). Michiganians working for the automobile and other manufacturing industries are now outnumbered by government workers supported by taxpayers.

Michigan reached this dubious milestone even though the number of full-time state civil servants is down slightly in recent years, to about 52,400, according to the Michigan Civil Service Department, having fallen 2.5 percent depending on how one calculates the change from January 2003 through December 2006.

Funding state and local government institutions is an expensive endeavor. The salaries and fringe benefits granted to government employees often greatly outpace the compensation received by those taxpayers who foot the bills of government. Maybe the state has a higher concentration of professionals that raises the cost of funding government. On the other hand, the composition of employees may not explain compensation differences, particularly when you consider the fringe benefits enjoyed by every level of classified employee.

According to data from the Michigan Department of Labor and Economic Growth, the average private sector employee in Michigan earned $41,128 in fiscal 2005, compared to $48,421 for the average state civil service worker. State government employees, in other words, earned about 18 percent more than private sector workers. Fiscal 2006 numbers have not yet been released, so it remains to be seen if the gap widened or narrowed.

It should be noted that these figures do not include compensation for scores of non-civil servants, including the governor, legislators, judges and their respective staffs, many of whom have compensation packages even more generous than classified state employees.

According to the "Michigan House of Representatives Guidelines and Policies" chart of benefits, House staffers earn one vacation day for every 10 days they work (26 days total per year), on top of 12 official holidays. They also receive two bonus days for every five years of service. In other words, a five-year veteran of the House gets two months paid leave annually. State classified employees receive 13 official holidays in even-numbered years because Election Day is an official holiday, ostensibly to make it easier for them to vote.

Some might say comparing overall private-sector pay with that of state government is unfair because state employees generally do higher-end work. That’s why it’s important to look at pay for comparable jobs in the two sectors — whereupon one discovers that the disparity can be even more pronounced.

We telephoned several private employers in an attempt to make closer jobs comparisons. Following are some examples.

Why is it so easy for state governments to pay wages and benefits that greatly exceed the private sector? Because they can. When private companies face financial trouble, they may go out of business. Government has another option: it can reach deeper into taxpayers’ pockets.

Writing for the Mackinac Center in 1995, former state Rep. Margaret O’Conner cited a 1994 report from the American Legislative Exchange Council that offered this insight: "Private companies do not have the freedom to artificially raise employee compensation … A company that raises employee compensation above levels that customers are willing to pay (in the price for the goods they buy) will lose market share and eventually close … Government, unlike private employers, can artificially inflate public employee compensation, and compel the taxpayers to pay."

Further increasing the cost of employing state civil service workers is the fact that a relatively high percentage of state employees are unionized. Union bargaining has driven state compensation up over the years. Moreover, one benefit not addressed is the impossible-to-measure value of job security. It is difficult to remove employees from government payroll and often requires generous financial buyouts to induce early retirements.

As state officials work to balance the Michigan budget, they must look to further reductions in state spending. One reform that promises savings is competitive contracting. Instead of hiring employees to do every task, the state could contract for work with existing private sector companies. Done well, competitive contracting saves money and improves services. Further cost-saving measures have already been addressed in detail.

Brian Balfour is a Washington, D.C.-based tax policy analyst and an adjunct scholar with the Mackinac Center for Public Policy, a research and educational institute headquartered in Midland, Mich. Michael LaFaive is director of the Morey Fiscal Policy Initiative with the Mackinac Center. Permission to reprint in whole or in part is hereby granted, provided that the authors and the Center are properly cited.