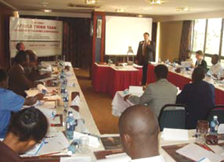 It only took The New York Times two decades, but the newspaper committed to “all the news that’s fit to print” recently gave its 1.7 million readers a snapshot of one of the most remarkable movements in American public policy — the ascendance of state-based, free-market think tanks.

In telling this story, Times reporter Jason DeParle focused on the impact of the Mackinac Center’s eight-year-old “think tank school,” his term for our biannual Leadership Conference that has trained nearly 500 think tank executives from 42 nations, Washington, D.C., and nearly every U.S. state.

DeParle worked more than a year to produce an extraordinary two-part series the Times called “The Conservative Reach.”

Part I, titled “Right-of-Center Guru Goes Wide With the Gospel of Small Government,” highlighted Mackinac Center President Lawrence W. Reed’s role in mentoring think tank leaders throughout the United States and the world. The front page of the Nov. 17 issue referred to Reed in a blurb steering readers to the nearly 2,000-word story inside. The article and the Times Web site included a photo of Reed at the Center.

Part II of the series ran the next day on the front page and above the fold. Under the headline, “In the Marketplace of Ideas, Conservatives Export,” the article ran more than 2,000 words (in comparison, this story contains about 600 words). DeParle’s series reported on the influence of free-market think tanks — in the United States, Africa, Europe, Latin America and Asia — whose leaders have been trained by Reed and the Mackinac Center.

DeParle wrote, “Policy institutes have been central to a national organizing strategy that has long won the right a reputation for savvy, and state level versions are growing in number and clout.”

The series included photos of the leaders of many of our sister think tanks and documented their successes, particularly those of the relatively young Bluegrass Institute for Public Policy Solutions in Kentucky and the Inter-Region Economic Network based in Nairobi, Kenya. Referring to the proliferation of free-market policy groups, DeParle wrote, “No one is more central to this replicating effort than Mr. Reed.”

The Times stories depicted the Mackinac Center and similar groups as more relevant to the public debate than ever. In light of Republican defeats in the 2006 midterm elections, DeParle reported that “many conservatives” consider freemarket think tanks and their networks “vital to the movement’s revival.” DeParle wrote that such institutes have “offered conservatives a base of influence independent of electoral politics.”

Although the Times repeatedly conflated “free-market” with “conservative,” DeParle quoted Reed explaining why “free-market” is a more accurate description of groups that stress primarily economic issues, not social ones.

DeParle interviewed detractors as well, including Michigan Education Association union officials. His article recounted how the Mackinac Center exposed the fact that while the MEA officially opposed any effort by schools to contract for private support services (such as security and food), the union simultaneously contracted for the same services at its own headquarters.

The response to the Times series has been overwhelmingly positive. The Mackinac Center received nearly 300 congratulatory e-mails immediately after the articles’ publication. Acknowledgement by the New York Times affirms the importance, and the growing influence, of the Center efforts to advance free-market ideas through public policy research and education.