Overview and Background of Proposal 5 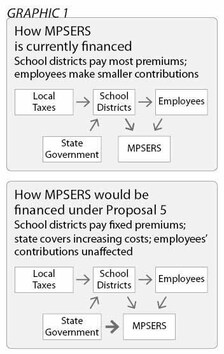 On Nov. 7, 2006, Michigan voters will be asked to consider a proposed new law that would, if passed, predetermine certain financial priorities for state government by mandating annual increases in state spending for education at all levels. The proposal also contains requirements for new state payments to districts with declining enrollment and places increased liability for school employee pension costs on state government, rather than school districts. The proposed new law will appear as "Proposal 5" on the ballot.

Proposal 5 is not a proposed amendment to the state constitution; it is a citizen "initiative," as described in Article 2, Section 9 of the Michigan Constitution. This constitutional provision allows citizens to draw up proposed laws, gather registered voters’ signatures in support of the proposal and submit them to the Legislature for approval or rejection "without change or amendment" within 40 session days. If the Legislature fails to approve the citizen initiative, the proposal is presented to the state’s voters at the next general election.

The proposal’s mandates would take effect in the 2006-2007 school year. Because the Legislature has already approved the fiscal 2007 budget, which covers this school year, lawmakers would be required to revise the budget and make additional payments to educational institutions if voters approve the proposal.

The brief ballot summary and exact text of Proposal 5 appear in an appendix at the end of this study. In plain language, Proposal 5 would create the following spending requirements:

The proposal would require annual state spending to increase at no less than the rate of inflation in two major areas of education spending by state government:

Note that these provisions do not limit the money raised by local property taxes to service school district debt for construction and capital expenses. Local property taxes would continue to increase or decrease in accordance with the outcome of local bond elections and constitutional limits on property tax rates.

Proposal 5 would also mandate that state spending on education would increase at no less than the rate of inflation for four main components of state spending on public school districts (item No. 1 on the list above):

As noted above (in item No. 2 in the first list), total annual state spending for Michigan’s public universities and community colleges would also receive an annual inflationary spending increase. This mandate, however, would not apply to each individual school. Thus, annual spending for some universities could increase by more than inflation, while spending for others could increase by less (or decrease), as long as the total spending in the higher education budget increased by at least the inflation rate. The same would be true for schools that received their state funding from the community colleges budget.

About 11 percent of the state’s districts, however, currently receive their per-pupil foundation allowance based not on the usual counts, but on the average of the districts’ counts in the current year and in the previous two years. These districts qualify for this alternative payment method through their low population densities, small enrollment (fewer than 1500 students) and ineligibility for special state monies for geographically isolated areas, such as islands.[1]

Proposal 5 would extend the alternative payment option to any district wishing to use it. Since the three-year formula would include student counts from previous years, it would increase the state money that districts with declining enrollment received. Districts with stable or increasing enrollment, on the other hand, would remain free to receive their per-pupil foundation allowance based on their current student enrollment.

Proposal 5’s second new spending provision would speed up the process of reducing the funding differences between Michigan’s higher-spending public school districts and lower-spending school districts (and charter schools). Some reduction has occurred since the passage of Proposal A in 1994, but Proposal 5 would further the decrease so that the difference between the foundation allowances for the higher-spending and lower-spending districts would fall from the current $1,300 per pupil to $1,000 per pupil by fiscal 2012.[2]

A Transfer of Responsibility for School Employee Pension Cost Increases

MPSERS is for the most part a conventional "defined-benefit" retirement plan. MPSERS is managed by the Michigan Office of Retirement Services and is governed by an appointed board representing various school and government stakeholders. The MPSERS staff, with guidance from the board, selects where and how to invest pension funds, and education retirees receive a fixed payment after retirement based upon their years of employment and salary history.[4] Additionally, MPSERS enrollees are eligible to receive a retirement health care benefit for themselves and their dependents at a discount, paying less than 15 percent of the actual premium cost of their medical insurance from the time of retirement until they are old enough to receive federal Medicare benefits.[5]

Local school districts assumed their current MPSERS responsibilities in 1995, following the passage of Proposal A, the landmark state education finance reform proposal of 1994. Since then, the districts’ annual MPSERS contribution rate has fluctuated from a high of 14.92 percent of pretax payroll (during 1997) to a low of 10.68 percent of pretax payroll (the following year).[6] 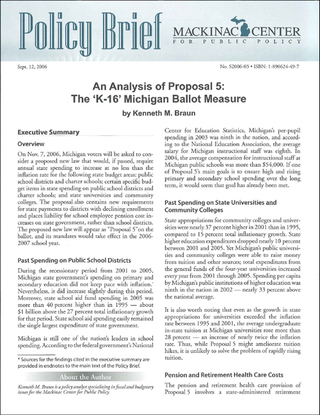