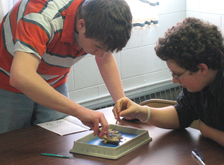 In a setting that combines home schooling, bartering and elements of a one-room school house, the Jackson Area Home Educators Pioneers are pioneering new methods in education.

The group that began with 21 students in 1994 has grown to almost 150 in grades five through 12, plus another 25 in preschool and younger grades. The students meet once a week to learn subjects ranging from reading and writing to math and science from other parents, as well as hired tutors.

“With the older kids, it’s basically a full core high school curriculum,” according to Patti Sailor, one of the founders of the group. “Most of it is parents who have an expertise in one area or another, but for the high-level classes, we hire people to come in and teach.”

Sailor said such tutors can cost between $10 and $20 an hour, which can make it cost prohibitive for some families. In a cooperative setting, the money is pooled and more students can benefit.

“We have a lot of former teachers, people who have retired or moms who stopped teaching to stay home with their kids,” Sailor said. “Most of them have master’s degrees, and some are professionals in their field."

“One person might know a lot of things about a particular subject, but not so much of something else.”

Sailor points to one woman who has a master’s degree in engineering.

“She’s more than qualified to teach things like algebra and trig,” Sailor said. While a main staple of the home-school movement has always been parental guidance, Sailor said home-school families learn early on that they can all benefit by sharing resources.

“One person might know a lot of things about a particular subject, but not so much of something else,” Sailor said. “Some bartering goes on there, sort of like a ‘you teach my kids art and music and I’ll teach your kids Latin and composition’ type approach.”

For younger students, the cooperative serves as a way to experience hands-on enrichment classes.

“Some things, like art or choir, are just more fun when done in big groups,” Sailor said. “And for science, no matter what level, we can do experiments on a larger scale.”

The group rents space from a Jackson-area church and meets once a week during the school year.

“One day a week on site is for things like labs, lectures, that type of instruction,” Sailor said. “The kids then get a week’s worth of assignments, which the parents can help with at home the rest of the week.”

Sailor said instructors make themselves available by telephone and e-mail to answer questions in the interim.

“It’s nice, especially with e-mail,” Sailor said. “Kids and parents can send a message any time of day or night if they’ve got questions.”

The cooperative also includes a nursery for the infants and toddlers of parents who teach classes.

“That’s another spot where the barter system comes in handy,” Sailor said. “If you work in the nursery, you can get a free class for one of your children, and that’s $150 to $200 savings right there.”

Sailor said other cost savings can be realized by high school students being exposed to Advanced Placement classes. One of her sons, for example, tested out of two years of Spanish at Spring Arbor University.

“We don’t have the option of dual enrollment being paid for, so AP courses are a big help,” she said.

That son, Sailor said, who was homeschooled for many years, including high school, is now at Michigan State University medical school.

“He did graduate,” Sailor joked. “He can read.”

Sailor said the changes in home schooling, including broader acceptance and less government intrusion in the process, have been extremely noticeable over the past 20 years. Michigan law is among the most liberal in the country when it comes to parents making home-school choices they feel best serve their children. The law, in fact, says there is no requirement for home-schoolers to “notify, seek approval, test, file forms, or have any certain teacher qualifications.” The law goes on to say that the burden is on the state to prove parents are not teaching their children.

“My son met a lot of other kids in college, from Michigan and other states, who were home-schooled,” she said.

The Home School Legal Defense Association reports that about half the students educated at home go on to attend college, which is roughly the same rate as the general population. HSLDA also reports that in 2004, home-schoolers reported an average ACT score of 22.6, compared to a national average of 20.6.

According to the U.S. Census Bureau, about 2 million students nationwide are home-schooled, compared to roughly 50,000 in 1985, with a growth of 15 to 20 percent a year. A June New York Times story said the U.S. Department of Education found that 21 percent of home-school families employ some type of tutor. 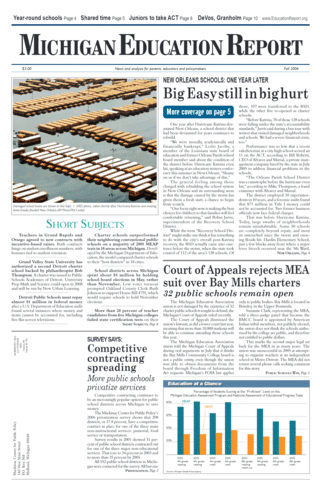